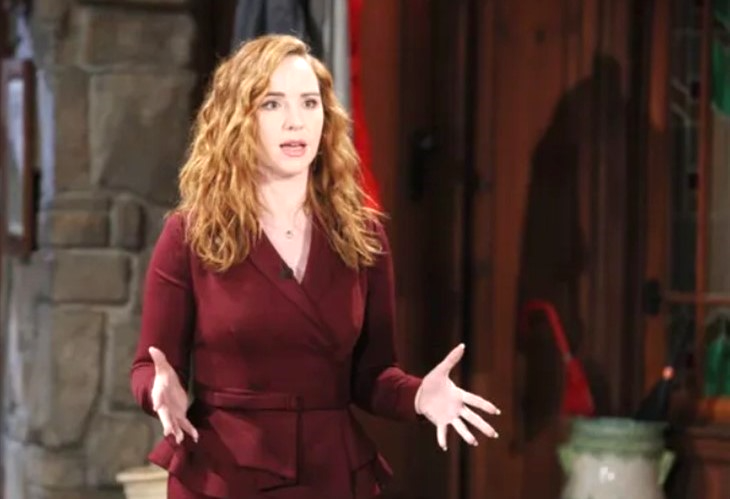 The Young and the Restless spoilers for Wednesday, July 28, 2021, reveal Mariah in trouble while the people who are supposed to care about her still seem to have no clue.

The Young And The Restless Spoilers – Mariah Wants Out

When Mariah (Camryn Grimes) first disappeared, Abby (Melissa Ordway), Tessa (Caitlin Fairbanks), Devon (Bryton James), and Sharon (Sharon Case) were worried, but once they got a text message from her saying she needed a little time away for rest and relaxation, they decided all was fine and to just give Mariah her time. Not getting anything but text messages never seemed strange to them, even when Abby and Tessa argued about who was to blame for Mariah leaving.

But now it looks like Mariah didn’t leave Genoa City voluntarily at all. Instead, she is locked in what looks like a very nice room, but she also clearly does not want to be there and begs her captor to let her and the baby she is carrying out. Who would want to kidnap a very pregnant woman? Perhaps someone who just returned to town and has been a great support to Abby over the last few weeks…

Phyllis (Michelle Stafford) is not about to allow Sally Spectra (Courtney Hope) and Tara Locke (Elizabeth Leiner) get away with their little plot to run Summer (Hunter King) out of town and take everything that was hers. She needs to get some sort of proof these two manipulative young women are working together.

To that end, she puts some phony charges on Sally’s Grand Phoenix bill to distract her so she can steal her phone for just a few brief minutes and text Tara while pretending to be Sally. What fruits will this little scheme bring her?

It looks like Imani (Leigh-Anne Rose)is going to be sticking around GC to get her law degree and go into practice with Amanda (Mishael Morgan) as her partner. So, of course, she needs a man and she’s decided that man has to be Nate (Sean Dominic). Too bad he’s already involved with Elena (Brytni Sarpy). Will Elena ever be able to catch a break from the daughters Naya (Ptosha Storey) gave birth to? Stay tuned to The Young and the Restless weekdays to see how these stories play out.

90 Day Fiance: The Other Way Spoilers: Who’s Coming Back This Season – We Got The Info!