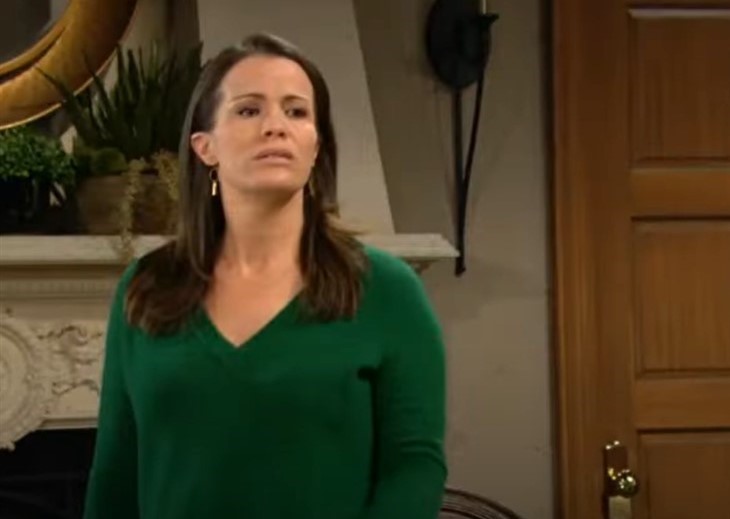 The Young and the Restless (Y&R) spoilers for Wednesday, May 12, 2021, reveal Chelsea going to great lengths to save herself — and keep Connor.

The Young And The Restless Spoilers – Chelsea Lawson’s Getting Desperate

Chelsea (Melissa Claire Egan) might feel there is no way out except to do what she does best — con. Victor (Eric Braeden) knows what she did and is threatening to take away her most dangerous possession — her son. Even Rey (Jordi Vilasuso) is becoming suspicious of Chelsea and he is the one who nearly died from her actions.

When Rey starts sniffing around and asking questions, Chelsea knows she has to do something fast. Will her simple conning ways do the trick or does she have to do something much more extreme? Rey’s life may be in danger again, but at least he knows what and who he is dealing with this time. Does he have an apology to make to Sharon?

Sharon (Sharon Case) is left a crying mess by not knowing what will really happen with her new marriage and also not knowing how Faith (Reylynn Caster) will recover from her surgery. At least she has one person there to support her — Nikki (Melody Thomas Scott). Yes, it’s unusual to see these two women getting along, but when push comes to shove they always seem to be there for one another.

When Sharon hears what Nikki has to say this time, she is stunned. However, she has no idea how much Nikki was helping her behind the scenes when she had cancer last year. Nikki might just be the person that Sharon needs at this point.

The Young And The Restless Spoilers – Mother-Daughter Talk

Over at The Grand Phoenix, Summer (Hunter King) continues to obsess over everything — Sally (Courtney Hope), Kyle (Michael Mealor), Tara Locke, you name it. Phyllis (Michelle Stafford) begins to see that maybe her daughter is a bit too high-strung and obsessive about everything and offers Summer a little bit of advice. But will she take it or look at who it’s coming from?

Phyllis did try to help Summer out with Sally and all it did was backfire on her so perhaps she knows it’s time to bring Summer back down to Earth and into reality. Stay tuned to The Young and the Restless weekdays to see how these stories play out.