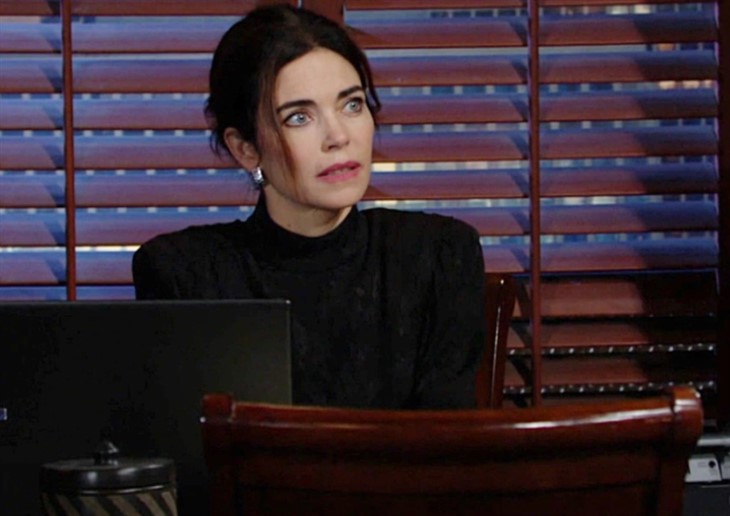 The Young and the Restless (Y&R) spoilers document that Victoria Newman (Amelia Heinle) recently telegraphed what she was intending. The audience was privy to the innerworkings of the mind of Newman Enterprises Chief Executive Officer before Ashland Locke (Richard Burgi) heard Victoria’s proposal.

Merging Newman and Locke Communications would allow Ashland’s legacy to live on. It’s also a great business deal for Victoria and a partial reveal at why she’s been cozying up to the supposed Lockeness Monster.

Ashland sees the angles of Victoria’s offer. His apparent, dire health status allows him to appear open to the opportunity.

Nikki Newman (Melody Thomas Scott) was concerned about her daughter’s judgment. Her maternal instincts were respectfully received by Ashland, as was the conversation this foursome had in the lobby at the Grand Phoenix Hotel.

Victor Newman (Eric Braeden), who’s uber protective of his children, was curious about Ashland’s motives. He’s come to partially respect the man, based on how he dealt with the completion of the Cyaxares deal. But the Moustache is nowhere near fully trusting him.

Despite her parent’s noses working overtime, Victoria knows what she’s doing. But Niktor’s first-born won’t reveal her goals to them.

Y&R Spoilers – Benefits Of Merger Are Many

Ashland seems to have six months or less to live out his life. The terminal cancer diagnosis means that he might not be fully functional for long. So, he needs to get his affairs in order before the worst hits.

As Victoria noted, the vultures will start circling his corporation once it’s learned that he’s dying. However, he could make a preemptive move in order to avoid that scenario.

Having already thrown-in with Victor and Adam Newman (Mark Grossman), it’s fair to believe that Ashland would choose to allow Victoria to take hold of Locke Communications. Burgi’s alter ego feels a kinship with the Newman family and has deeply bonded with Victoria, in particular.

Young And The Restless Spoilers – He Is Dying, Right?

No scientific proof was provided to Tara Locke (Elizabeth Leiner). However, Ashland stated that he would inform his son, meaning Kyle Abbott’s (Michael Mealor) actual biological son about his terminal status in the future. So, Ashland could be withholding the real truth.

Victoria learned about Ashland’s diagnosis through the verbal recant he offered during the day he claims to have received the bad news in New York. She doesn’t appear to doubt him, based on the topic and his demeanor.

There’s no way for the audience to definitively know whether Ashland is telling the truth or playing another game. He has a reputation for doing anything to either get his way or retaliate.

Along with personal implications that relate to Tara, imagine if Newman merges with Locke’s company and then he makes a miraculous recovery or at least says that’s what happened?