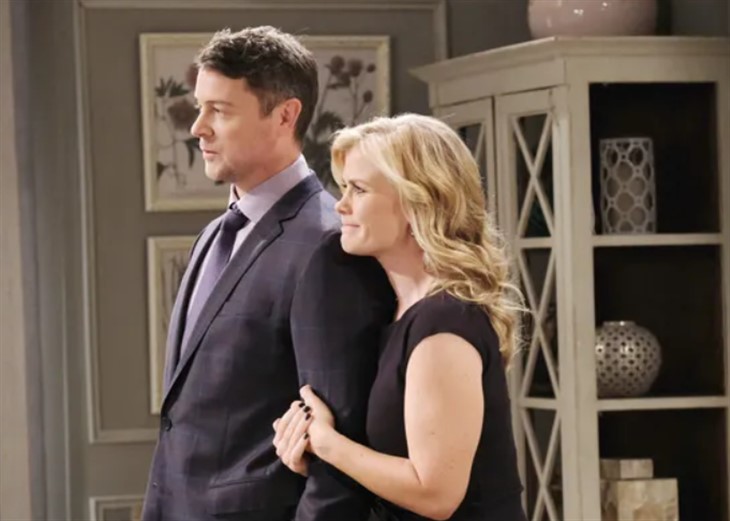 Days of Our Lives (DOOL) spoilers for the week of July 5 reveal that Sami DiMera (Alison Sweeney) will have a breakthrough. Ever since EJ DiMera’s (Dan Feuerriegel) “resurrection,” he’s been in his own world. Sami was desperate for love, affection, intimacy and feeling a connection. Even though Sami betrayed her husband, the couple will have a passionate breakthrough.

DOOL spoilers reveal that “Ejami” was just getting back together when EJ died from a gunshot wound. She couldn’t accept his death and it turned out that she was right to be suspicious. The body disappeared after Kristen DiMera (Stacy Haiduk) injected it with a bright green substance. Then, Sami told anyone who would listen that EJ was alive and he was leaving her clues. Those hints would drag Sami and her children to different locations around the world. Then, Sami actually ended up finding EJ.

EJ struggled to get back to normal and for the past several years, Sami has stayed by his side. No matter how hopeless the situation seemed, she refused to give up.

Even though Sami stayed by EJ’s side during his long road to recovery, the marriage has problems. EJ just couldn’t connect with Sami and after so many years, it left her feeling lonely and heartbroken. It was the whole reason why Sami ended up sleeping with Lucas Horton (Bryan Dattilo).

However, things are now moving in a positive direction. After years of praying, Sami is finally getting what she’s been craving. Even though EJ and Sami get intimate, some viewers are keeping their guard up. They might be right to do that as something isn’t adding up with “Ejami.”

It is hinted that EJ might already know about “Lumi.” Plus, he is said to be just as ruthless and vengeful as before. In fact, Sami will question EJ’s behavior and how he is going about getting what he wants. Instead of answering Sami or explaining the situation, he simply dismisses her.

However, that’s not the only issue. It seems that Lucas might turn into a big problem. He desperately wants to give his relationship with Sami another chance. She almost considered it but EJ has now thrown a curveball. He is now being the husband that Sami misses and remembers.

We know that Lucas will relapse and turn to booze. That is never a good sign, especially if Lucas ends up crossing paths with EJ. It seems as if he isn’t going to give up on Sami anytime soon. However, will she need to take extreme measures when her former flame’s determination turns into a dangerous obsession? Is EJ being genuine or is he just playing games with Sami? Are you worried about Lucas turning to alcohol again? Could the booze cause Sami’s entire life to spiral out of control?