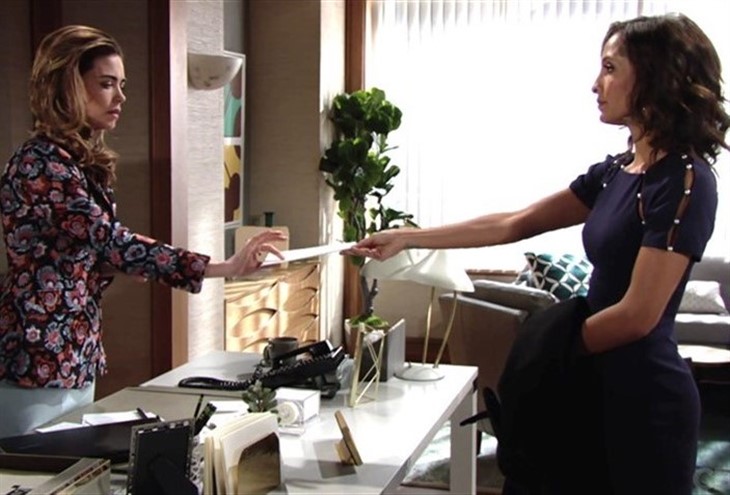 The Young and the Restless (Y&R) spoilers document that Lily Winters (Christel Khalil) senses what Victoria Newman (Amelia Heinle) is up to. She sees that a Villy reunion is desired.

Chelsea Lawson (Melissa Claire Egan) is off-base when it comes to Sharon Rosales (Sharon Newman). The effects of the stroke Chelsea suffered and the prospects of a recovery that might not allow her to regain the ability to speak or walk are significantly impacting Chelsea’s judgment. But Sharon likely isn’t a current threat.

The Young And The Restless Spoilers – Billy Abbott Is Volatile

Billy Abbott (Jason Thompson) has lived through many versions of Villy. Longtime fans know that four adult actors have portrayed this character across the years, with Thompson ably handling the role since 2016.

Lily is falling in love with Billy, which follows a brief infatuation she had with him when they were both very young. BiLily is a very real possibility, with this couple having a different dynamic than Villy did.

But Billy has a history of volatility, which Victoria is likely counting on. She believes that BiLily won’t last.

There’s no doubt that Adam Newman (Mark Grossman) is consumed by Chelsea’s current state. He also feels guilty because he had her abducted, which included his hired goon (who was played by Egan’s real life husband, Matt Katrosar) knocking Chelsea unconscious.

Chelsea’s daydream had Sharon returning to the penthouse, where she actually visited earlier that day. Shadam kissed, which caused Chelsea to emit the first known sound since her emergency surgery took place. Adam saw that as progress, while not being able to know what caused Chelsea’s groan.

The extreme emotions that Chelsea exhibits are understandable. She’s been through a terrible ordeal that has produced damaging effects, even if they prove temporary. Chelsea’s defensive feelings about Sharon, which play off past concerns, are understandable.

Lily and Billy seem to be trending in the right direction. Billy isn’t being harshly judged by Lily, as he believes Victoria did far too often. So, as of now, BiLily should persist despite Victoria’s pushback.

Chelsea and Adam’s storyline is more complex, due to their deep history and because of considerations that involve their son, Connor Newman (Judah Mackey). With however Chelsea’s recovery goes, even if full health is restored, her lingering resentment of Sharon won’t heal anytime soon. That makes Chadam’s future uncertain.