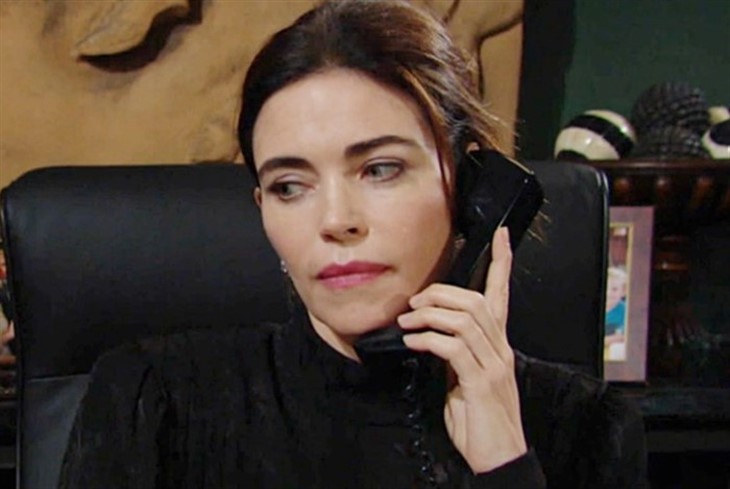 The Young and the Restless (Y&R) spoilers document that Victoria Newman (Amelia Heinle) has what she feels is a great idea. Billy Abbott (Jason Thompson) wants it to happen. Lily Winters (Christel Khalil) doesn’t and if Billy hopes to give his relationship with her a real chance to work he’ll reject Victoria’s joint partnership pitch.

Victoria has to be given credit. She’s come up with another way to win at business and to keep herself between Billy and Lily. Khalil’s character sees straight through Victoria, while Billy focuses on his vision for Chance Com potentially being realized.

But Ashland’s deal apparently hasn’t closed as Billy somehow came to know. That’s fortuitous for Ashland because Adam is now avoiding the law. He’s wanted for trying to kill Rey Rosales (Jordi Vilasuso) by poisoning him with Thallium.

Y&R fans know that Chelsea Lawson (Melissa Claire Egan) is guilty and also gleeful that her frame job worked. However, the audience doesn’t know how long it will take for Adam to prove his innocence. That gives Ashland time to sell Cyaxares to another entity if he wants to.

Billy was trying to get in touch with Ashland to make a second, more lucrative proposal. Burgi’s character instructed his staff not to allow Billy to get into the batter’s box during what is baseball’s opening week.

Victoria’s clever idea could allow an extra inning walk-off to happen, with Chance Com stealing victory after all. She knows that Ashland suggested a follow-up meeting with her before the bidding process ended, which implied that he was still considering a sale to Newman Enterprises.

Ashland was turned down, but that’s because Victoria believed he was implying something more than a business dinner. Now, she might play off his expectations in order to re-open discussions.

Lily and Victoria recently had a very direct conversation where each lady laid her cards on the daytime table. Billy told Lily that Victoria admitted to still being in love with him, which caused Khalil’s character to take a stand.

Billy wants Cyaxares so bad that he’ll need to accept Victoria’s financial backing, as Jack Abbott (Peter Bergman) turned his additional money request down. So, Lily is hoping that Ashland doesn’t change his mind. She also doesn’t want Victoria to establish a business link with Chance Com that would actually be intended to drive Billy and Lily apart.