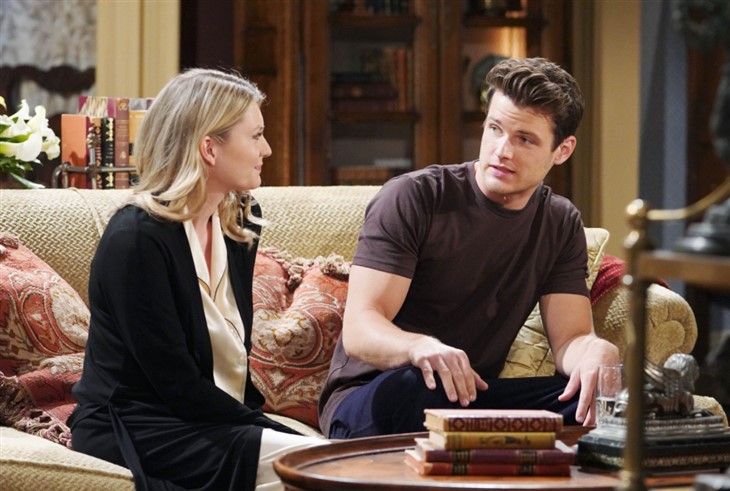 The Young and the Restless spoilers for Monday, July 5, 2021, reveal in Genoa City, Wisconsin Tara seeming to get exactly what she wants.

The Young And The Restless Spoilers – Will Kyle Abbott Not Waste Time?

A walk down memory lane leaves Kyle (Michael Mealor) with happy thoughts about that summer in The Hamptons, but does that walk make him forget that Summer (Hunter King) who is in Italy? Out of sight, out of mind, right? That seems to be what’s happening here. We thought Kyle was so in love, but we thought the same thing when he married Lola (Sasha Calle) and then divorced her for Summer within months.

This is exactly what Tara (Elizabeth Leiner) wanted and she knew she could get Kyle to fall in love with her again. With her sweet charm that many in Genoa City can see through, she has Kyle right where she wants him, but is that place in bed and will Kyle come to his senses in time before he does something he will truly regret?

Phyllis (Michelle Stafford) is upset enough that Summer left town because of that Tara Locke and now she sees Jack (Peter Bergman) growing close to the woman. She also sees him look at Sally (Courtney Hope) in that way again, wanting to forgive her.

That means it’s Phyllis’ time to step in and make sure Jack doesn’t do anything completely stupid with either of these much younger women. Will Jack listen to his ex-wife or decide he’s old enough to make his old decisions — about younger women? Phyllis feels it’s her duty to protect Jack or anyone else she feels is making a mistake with their life.

The Young And The Restless Spoilers – Adam Newman Makes A Change

The Great Victor Newman (Eric Braeden) had a proposal for Adam (Mark Grossman) and he wasn’t sure what to do. But does he now take Victor up on his offer and move into the ranch? Wouldn’t that put him awfully close to Sharon (Sharon Case) and wouldn’t that make Rey (Jordi Vilasuso) a very sad man? Sharon and Adam have been needing something to do, so this would give it to them. Stay tuned to The Young and the Restless weekdays to see how these stories play out.

90 Day Fiance: Does Mike Youngquist Have A New Girlfriend?

General Hospital (GH) Spoilers: What Is Laura Wright’s Net Worth?