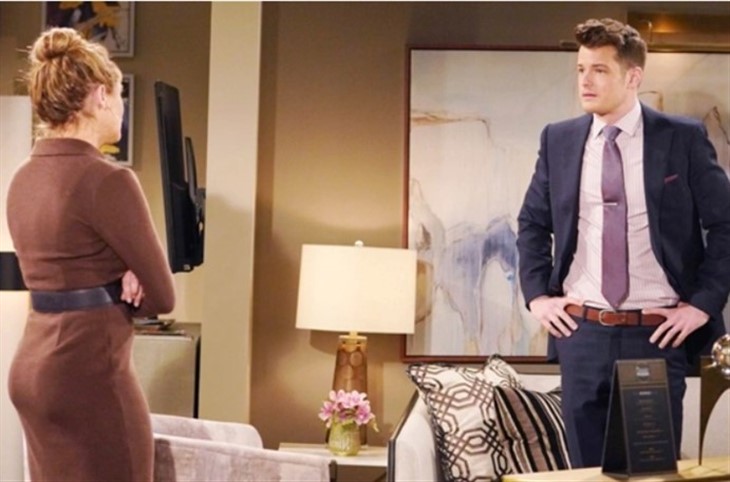 The Young and the Restless (Y&R) spoilers document that in Genoa City, Wisconsin Kyle Abbott (Michael Mealor) has no logical reason to withhold information from his father. But he’ll make another mistake when using the same strategy with Jack Abbott (Peter Bergman) that he did with Summer Newman (Hunter King).

As fans recall, Kyle told Summer the truth in stages. As time passed he felt pressured into telling her about his relationship with Tara Locke (Elizabeth Leiner) before eventually revealing the paternity issue.

Now, Kyle’s use of the same flawed approach leaves him, his father, and the family business vulnerable. The Abbott’s and Jabot could soon be targeted by Ashland Locke (Richard Burgi) as a result of what this new character suspects.

The Young And The Restless Spoilers – Reckless Behavior Creates Another Mistake

It was wrong for Kyle and Tara to have a relationship in New York in years past. But they did and it’s at least possible, if not certain, that Kyle is Harrison Locke’s (no actor known to be cast for this role) father.

It was foolish for Kyle and Tara to get into a heated argument in the lobby of the Grand Phoenix Hotel. Doing so led to Ashland seeing a second, suspicious incident. He noticed some type of familiarity at Society earlier in the week.

The commonality between both incidents was the reckless decision both people made. They lacked self-control, which underscores the emotional connection they once established and maintain to a certain degree.

Summer told Kyle the truth. He is assuming Tara is being honest about him being the father of her son, but he doesn’t know it.

A paternity test is needed to confirm, or rule out Kyle’s blood tie. If he is Harrison’s father, then Jack’s support will be vital.

But Kyle is trying to save his father heartache, just as he tried to protect Summer. Kyle’s thinking centers on Harrison not being his son, meaning that Jack doesn’t need to be aware of an explosive theory that could prove to be based on nothing more than Theo Vanderway’s (Tyler Johnson) snarky speculation and Tara’s verbal acknowledgment.

The Young And The Restless Spoilers: Faith Injured In Drunk Driving Crash, Will Nick And Sharon Lose Their Daughterhttps://t.co/ewil64pMIk

The Young And The Restless Spoilers – Ashland Locke Deserves The Truth

There has been a lot of conjecture about what Ashland will do if he learns about Kyle and Tara being involved. More emotions are tied into him potentially learning that Kyle is the father of the boy Ashland believes is his own son.

Ashland has a right to be suspicious, which could imply that Tara has strayed before, that he has, or that both did. With whatever is true for the Locke’s, Ashland also has the right to know if Harrison is his son and that frightens Kyle.