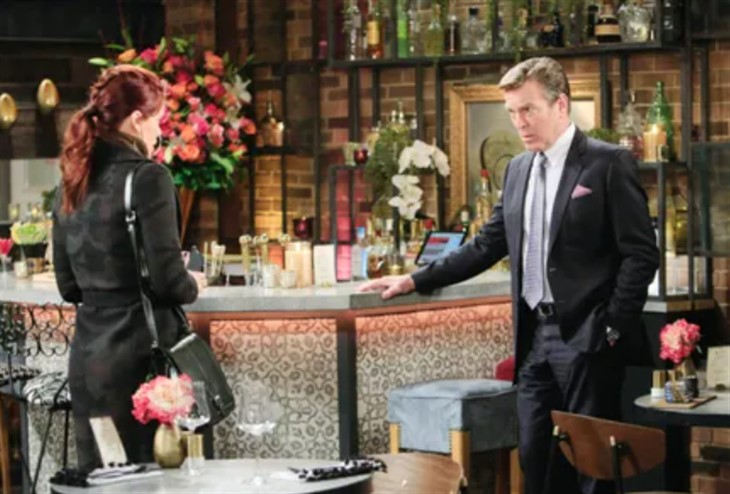 Viewers of The Young and The Restless will recall that Sally found out in a very uncomfortable way that Jack knew people from the past in Los Angeles that Sally had come to Genoa City to leave behind! She walked into the boardroom to find Lauren Fenmore Baldwin, (Tracey E. Bregman) Jack, and Dollar Bill Spencer (Don Diamont) talking! Sally tried to keep her cool in the presence of Dollar Bill, but quickly turned around and left, a fact which was not unnoticed by Jack!

Sally recognized immediately that Dollar Bill and Jack knew each other, as well as Lauren! Sally already has some serious, serious and scary dirt on Kyle Abbott (Michael Mealor) about his partying past in New York City, thanks to Theo Vanderway (Tyler Johnson). But Sally is on the defensive – she really doesn’t want to hurt Kyle or ruin his life, she just wants some leverage to keep Summer Newman (Hunter King) from ruining hers! She even warned Summer about Dollar Bill, and not to trust him because he can ruin someone’s life and livelihood in one fell swoop, and she even told her about how he tried to burn down Spectra Fashions with her trapped inside!

It is the same with digging up dirt on Jack – she doesn’t want to hurt him or ruin his life, but she wants some leverage just in case he doesn’t turn out to be the kind and benevolent person he appears to be to her. Y&R recaps show Theo had a bad opinion but then Theo has a grudge!

Y&R Spoilers – What Could Sally Spectra Find Out About Jack Abbott She Could Use?

Young And The Restless recaps show Jack would be the first one to admit that he made a lot of mistakes as a younger man, some of which hurt others badly and cost him dearly! He had a son he never knew about until Keemo Abbott (Phillip Moon) and Luan Volien (Elizabeth Sung) showed up in Genoa City.

That was a wartime romance in Vietnam and Luan had never told Jack she was pregnant. Luan and Jack finally did marry, but she died shortly thereafter of a terminal disease and Keemo returned to Vietnam. Jack hasn’t heard from him for years. That’s nothing that Sally could use as any kind of leverage, and it actually makes her feel sad. She’ll find out that Jack has been married to five other women, some of them multiple times.

She sees one of them was Phyllis Summers (Michelle Stafford), which surprises her. Sally should go into the private investigation business, she’s actually pretty good at finding out all these facts, but then Jack was somewhat of a playboy in his younger years – fifteen women BESIDES the ones he was married to? Sally quickly realizes Jack’s got both the Forresters and the Spencers beat all to heck! He’s even been involved with more women than Brooke Logan (Katherine Kelly Lang) has been with men!

She discovers Phyllis was a real stinker but no worse than Sally herself – then she discovers Patty Williams (Stacy Haiduk) who was actually Jack’s first wife. He married her a couple of times, and then she realizes the woman was insane and is institutionalized. She has a hard time using someone who has those kinds of challenges as leverage over Jack, and besides it’s public record.

She is shocked to find out that Jack and Lauren were an item years ago. Then she finds out that Jack was once sued for sexual harassment by a Jill Abbott (Jess Walton) and she won the suit – only to have an affair with Jack when married to his father, John Abbott (Jerry Douglas). Now, THAT’S some juicy stuff, but that was so many years ago! But then she discovers that he once collaborated with an Adam Wilson, now known as Adam Newman (Mark Grossman) in some kind of scam involving a diary that Victor Newman (Eric Braeden) had written. Only Adam was charged, however. THAT might be something to put in her leverage file!