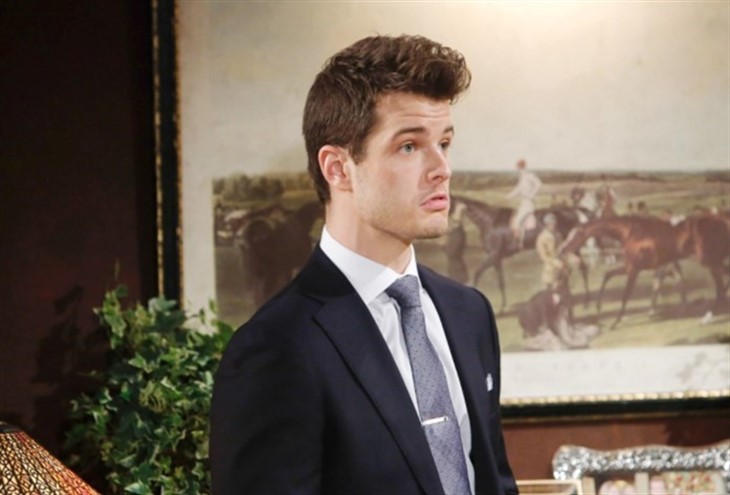 The Young and the Restless (Y&R) spoilers document that Kyle Abbott (Michael Mealor) can’t accept Tara Locke’s (Elizabeth Leiner) statement. He left a voice mail for her. She responded by saying that he’d made a mistake and shouldn’t contact her again.

It’s easy to believe that Tara wouldn’t want to be in touch with a former romantic interest because she’s married and has a son. That child may be Ashland Locke’s (no actor known to be cast for this role), or he could be Kyle’s.

Young and Restless recaps show Theo Vanderway (Tyler Johnson) intentionally disrupted Kyle’s life with information he either knows, or has chosen to interpret. Kyle must have Tara confirm whether Kyle’s intel is accurate.

Theo has made many true, exaggerated, and intentionally false statements. So, Theo could have seen a physical resemblance between Kyle and the boy he saw with Tara when he was in New York.

Viewers can’t rule out that Theo may have some type of actual DNA evidence, as he referenced. But it seemed like he was projecting what he assumed and would like to be true.

No one can say that Theo didn’t make this story up in order to get another rise out of Kyle. This time he would also be using Sally Spectra (Courtney Hope) as a proxy, rather than go after his cousin on his own.

Y&R Spoilers – Why Keep The Whole Story From Summer?

Yes, Kyle doesn’t want to needlessly worry Summer Newman (Hunter King). But his choice to withhold the full story about Tara is wrong, no matter how he’s choosing to rationalize this decision.

As Summer already knows, Skyle wasn’t together when he was in New York. Kyle’s (as then played by Lachlan Buchanan) relationship with Tara came after he was written out of the show for a few years. Mealor later became the recast.

Summer would be stunned by the news, just as Kyle was. But she would also be supportive. Kyle should know that. Not telling her now will rightfully cause Summer to question the level of trust that exists between them whenever this information is revealed.

The Young And The Restless' Spoilers: Kyle's Life Destabilized – Tara Is A Threat Or An Ally? https://t.co/sjaIeREB6s

The Young And The Restless Spoilers – DNA Test Must Be Conducted

Unless Tara had a DNA test conducted, proving that her husband or some other man is the father of her child, then Kyle could be the dad. So, he must press her on this matter until a definitive answer is known.

A discrete paternity test could be conducted. But Tara wants to avoid that happening, as Ashland’s infamous wrath could be invoked with whatever the outcome.

So, Y&R spoilers and rumors show Kyle won’t be able to let this go. He’ll learn whether he is a father and if Summer will remain his intended wife.

The Bold And The Beautiful (B&B) Spoilers: Liam And Finn Face Off