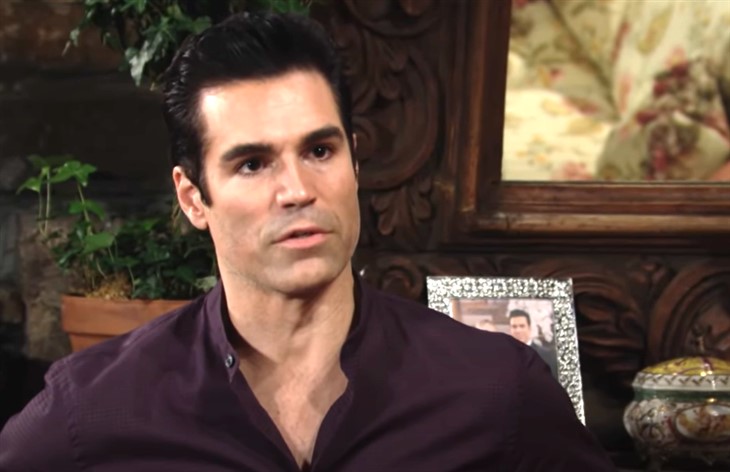 Viewers of The Young and The Restless will recall from previous episodes that Adam Newman is once again on the run! His father, Victor Newman (Eric Braeden) came home to the Newman Ranch to find Adam sitting in the study – and was wondering why he was in there instead of hiding out in the tack room like he had told him to. Adam wanted to say goodbye, at least temporarily. He was glad that he and Victor had bonded again, but he needed to get away from Genoa City; even if it weren’t for the all-points bulletin the police had out on him as a person of interest in the thallium poisoning of Rey Rosales.

Victor had just come back home from Adam’s penthouse, where he had confronted Chelsea Lawson about faking her lack of recovery and also her framing of Adam. Viewers of The Young and The Restless saw that Chelsea has become so conniving that even her best friend, Chloe Mitchell (Elizabeth Hendrickson) cannot trust her any more. She moved out and cited that she had no idea Chelsea was making her an accessory to a crime, and she said she needed to get back to her husband and children, one of which is a baby under six months old. She was likely listening to everything Victor said to Chelsea and very possibly got spooked by him! Victor didn’t like that Adam was leaving town again, but he understood; and he promised that he would get him cleared so he could come back to town when he was ready. Adam also needed space from Chelsea because of her betrayal of him.

Viewers of The Young and The Restless will also recall that Victor wasn’t Chelsea’s only visit that day. Rey Rosales also paid her a visit, before Victor arrived. He was able to see that she at least can talk and can think, although he didn’t believe that she has recovered to the point that Sharon Rosales (Sharon Case) told him Adam said she had. Rey will visit her again and he has a plan to draw Adam out of hiding. The big question is, is whether Chelsea will work with him on it! Rey is desperate to put Adam away for many reasons, besides that he believes Adam was the one who poisoned him and that Chelsea had nothing to do with it. Chelsea wants Adam put away too, but she may be hesitant to use her son as bait!

Rey may suggest something like having Chelsea take Connor out of school, and perhaps putting Chelsea and Connor in a police safe house under police protection. Then, since they have no idea where Adam is, they will have to put out a fake news release that Connor is missing in hopes that Adam will hear or see it on the news and come out of hiding to look for him. Chelsea may not go along with that – for one thing, Adam’s family members could not be let in on the ruse, because she will figure that Victor will know where Adam is and tell him it’s a ruse! Victor may figure it out anyway. Nick Newman (Joshua Morrow) would be upset and blame Adam for the kidnapping, but that may not be such a bad thing-but if the plan did draw Adam out of hiding, then he and the rest of the family would have to be informed after Adam is intercepted. It’s not a perfect plan but it’s all Rey’s got!