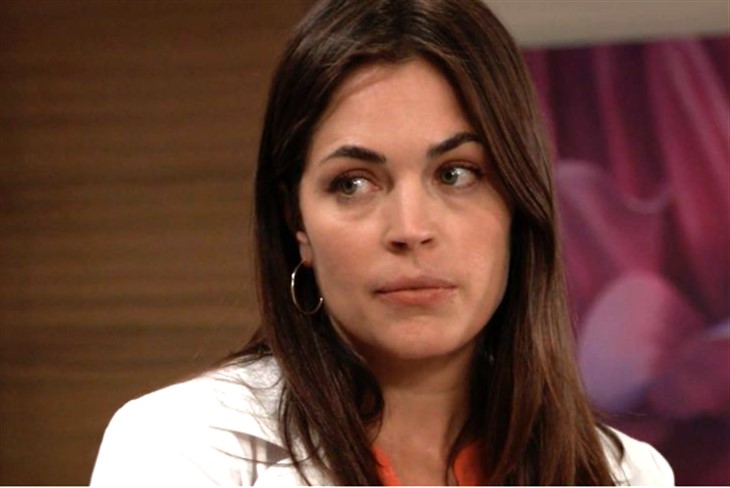 General Hospital (GH) spoilers tease that Britt Westbourne (Kelly Thiebaud) may know that she’s dying – General Hospital viewers will recall that she told Maxie Jones (Kirsten Storms) that “the secret would die with her” in a recent episode of General Hospital.

General Hospital viewers will remember that Britt has a developing condition affecting one of her hands. It started out gradually with just a tremor, but now it has progressed into weakness and severe pain when trying to use her hand. The day that Britt and Maxie were talking about keeping her and her baby safe in an examining room at General Hospital, Maxie talked about the two of them saying the baby would die, on paper only of course and Maxie was going to have someone else care for her until Peter August (Wes Ramsey) could be brought to justice. Britt promised that the secret “would die with her!”

It seems that someone wouldn’t say that concerning a baby – could Britt know she doesn’t have long to live? Then, in the next General Hospital episode, Maxie wanted to just go home, she refused to stay in a room at General Hospital indefinitely. Then Britt’s mother, Dr. Liesl Obrecht (Kathleen Gati) came into the room and wanted to do an additional check on Maxie – Britt and she got into a little bit of a verbal scuffle.

Maxie didn’t think she needed an additional checkup anyway, as General Hospital viewers will recall. As Maxie was getting ready to be discharged and go home, she dropped her overnight bag and Britt was going to pick it up for her; suddenly she experienced severe pain and dropped the bag back on the floor, which greatly concerned her mother Liesl – she claimed she hit her funny bone on a table, but it didn’t look like Liesl was buying it.

Cesar Faison (Anders Hove) had Huntington’s Disease, so it is probably a concern to Britt, but he didn’t develop symptoms like she has. It wasn’t found until his autopsy was done and Dr. Kevin Collins (Jon Lindstrom) took his brain to study it. Since her father had Huntington’s Disease, she has a fifty-fifty chance of getting it, and over time, it will be fatal. There is no cure. While hand pain, tremors, and weakness can happen to someone with Huntington’s Disease, they can also be symptoms of other conditions such as Parkinson’s Disease, multiple sclerosis, or Lewy Body dementia. Huntington’s Disease is caused by the wasting away of certain brain cells, and can only be diagnosed through an MRI, or magnetic resonance imaging.

Britt is very likely concerned that she may have inherited Huntington’s Disease from her father and if she knows she is dying, it is probably because she has gotten a MRI on her brain, possibly in another hospital in Port Charles such as Mercy Hospital, where Dr. Portia Robinson (Brook Kerr) transferred to General Hospital from. As a doctor, Britt would have made it her mission to know the symptoms and one would think she had gotten checked for it, but perhaps she is hiding fear very well and is too afraid to be checked! Time will tell!