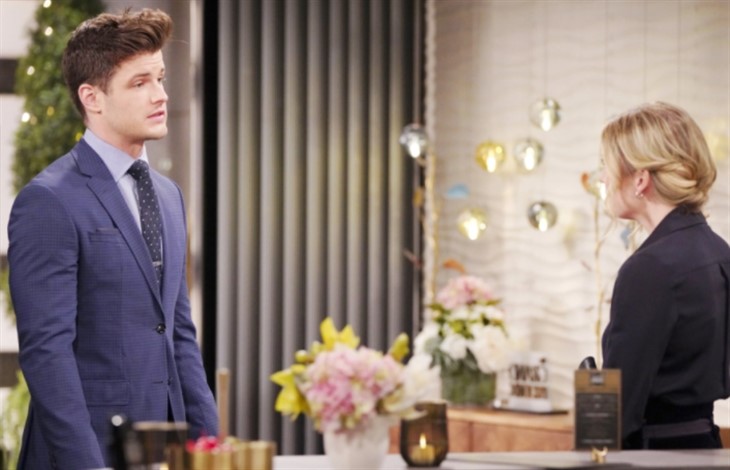 The Young and the Restless spoilers reveal that Kyle Abbott (Michael Mealor) is trying to focus on anything but Summer Newman (Hunter King). Tara Locke (Elizabeth Leiner) is doing what she can to manipulate him into experiencing a family bond. Using Harrison Locke (Kellen Enriquez), Tara could set up a family day at the park which just might end in a kiss.

The Young And The Restless Spoilers – Tara Locke’s Fantasy

Y&R spoilers reveal that last week, Tara had a fantasy in which she passionately kissed Kyle. So, that makes it clear that her goal isn’t just access to the Abbott money, status and connections. She also wants what she used to have with her former boy toy. While other women might wait a bit so Kyle could recover from his heartbreak, Tara isn’t wasting any time at all.

Each time that Kyle is lost in sadness thinking about Summer leaving so abruptly, Tara offers fake support, such as her suggestion that they can “lean on each other.” She might sound like she’s saying all the right things and trying to be a friend to him. However, she doesn’t really care about his loss or how much he’s hurting. The only thing she cares about is getting what she wants. Right now, what she wants is to be a family with Kyle and Harrison to replace the one she lost with Ashland Locke (Richard Burgi).

The Young And The Restless Spoilers – Kyle Abbott’s Devastating Loss

The Young and the Restless spoilers reveal that Kyle considered Summer to be the love of his life. So, Tara might think she can just swoop in and replace that hole in his heart. However, that’s not exactly how love works. Even if Kyle seems okay on the outside, he’s probably spending much of his time thinking about Summer. Those memories will fade over time, but not right away as Tara hopes.

Tara has already realized that she can’t get Kyle back with just herself. She sees how quickly Kyle bonded to Harrison. So, she uses the innocent three-year-old boy to get her hooks into her former flame. Kyle and Tara will take Harrison to the park. As the parents watch their son play, Tara will use her words and body language to bond with Kyle.

Even though it is speculated that Kyle kisses her, fans know that Tara really sets things up that way. She doesn’t want to be accused of taking advantage of Kyle’s broken heart. However, it’s completely different (in her mind) if Kyle is the one that makes the first move. How long before Kyle finds out the truth about Tara and why Summer really broke his heart?