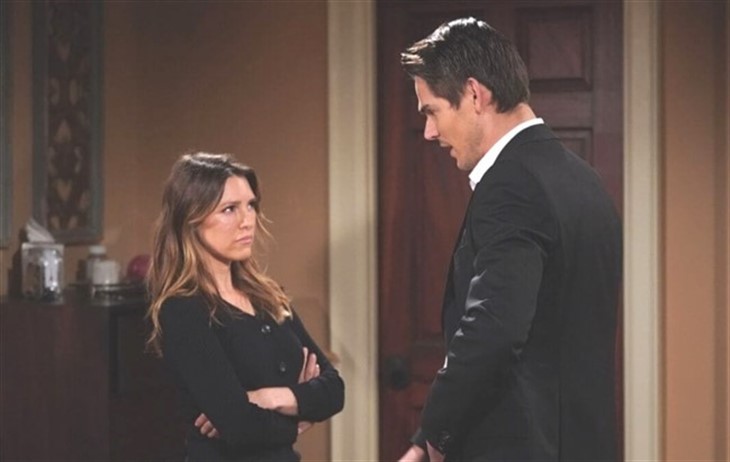 The Young and the Restless (Y&R) spoilers tease that in Genoa City, Wisconsin, Chadam is a no-go at this point. Chelsea Lawson (Melissa Claire Egan) and Adam Newman (Mark Grossman) may have been a hot ticket in the past but not after she tried to frame him for poisoning cop Rey Rosales (Jordi Vilasuso).

But have you heard of nu-Chadam aka Chadam 2.0? That would be Adam plus Chelsea’s bestie Chloe Mitchell Fisher (Elizabeth Hendrickson). Don’t choke Y&R fans, this is a serious rumor and we’re here to unpack it all. Seriously a rumor as in there is so much speculation it could already be a done deal.

The Young And The Restless Spoilers – Have You Heard The Rumor About Nu-Chadam?

First of all, Adam is fresh out of female admirers. Chelsea wants nothing to do with him and Sharon Rosales (Sharon Case) is pretending to be happily married to Rey. He saw her through her cancer battle and was poisoned on her behalf, so she’s trying her best to stand by her man.

Which leaves Adam all alone. But not for long. This week he welcomed Chloe into a new, ahem, position at Newman Enterprises and she looked more than thrilled to be all fussed over. Sure, she had a case of the jitters, but he smoothed her cares away with a ton of compliments and a load of flattery. It looks like these two are going to get on famously in the boardroom, what about the bedroom?

What’s that you say, Adam and Chloe are like oil and water? Well, so are a lot of other soap couples but that hasn’t stopped anyone from coupling them together. Case in point: Sally Spectra (Courtney Hope) and Jack Abbott (Peter Bergman).

Now there’s a couple that make zero sense and yet the Y&R writers seem intent on going there. Sure, Sally has been caught in a boo-boo by Phyllis Newman (Michelle Stafford) and Jack will see red when he finds out. But Jack is nothing if not forgiving and somehow we think Sally will be able to make herself look like the victim of a vengeful Phyllis.

The Young And The Restless Spoilers  – Do You Want tTo See Adam Newman And Chloe Mutchell Together?

Secondly if you think the fact that Chloe and Chelsea are friends will get in the way of a red hot affair, think again. There are no morals on soaps when hormones get tested; you can consider the nu-Chadam business arrangement a chem testing.

Trust us, if Adam and Chloe get the slightest bit attracted to each other, both will say, “Chelsea who?” quicker than they can rip each other’s clothes off.

The only thing standing in the way of nu-CHadam is possibly Kevin Fisher (Greg Rikaart). Oh and by the way, where has he been lately? Exactly. Tell us what you think of nu-Chadam Y&R fans!