General Hospital (GH) Spoilers: Nina Has Regrets, Blames Herself For Not Being A Positive Influence On Nelle 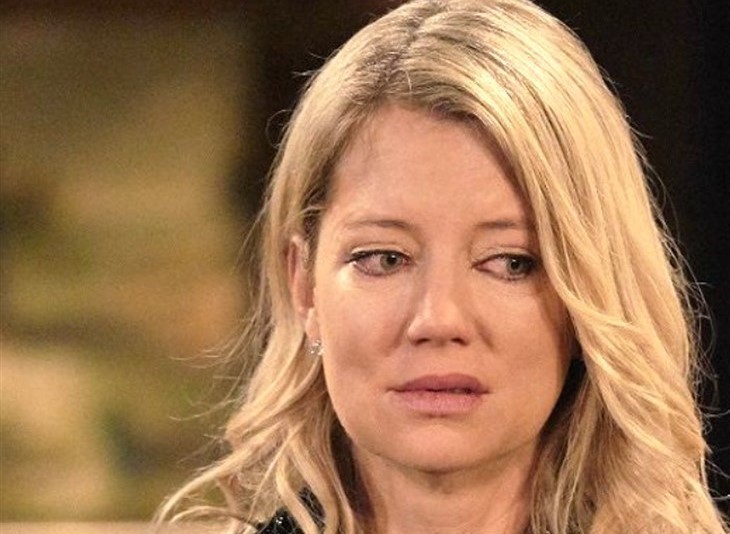 General Hospital Spoilers – The Truth Will Come Out; It’s Inevitable

General Hospital viewers will remember that Nina, wanting Nelle Benson (Chloe Lanier) to have a decent burial, bought a grave and paid for it herself. Nina had no idea that Nelle had the other half of the split heart pendant that she wore. In a recent General Hospital episode, Nina talked to Curtis Ashford (Donnell Turner) about giving up her search for her daughter, and letting her daughter search for her instead. Jasper “Jax” Jacks was with them at the time, as they sat at a table at Kelly’s. Jax’s face fell when Nina talked about letting her daughter look for her, as Jax was holding onto a terrible secret.

He got a little reprieve when Carly Corinthos (Laura Wright) suddenly called for Jax to come over to the Corinthos compound. As Carly talked to Jax and told him that Ava Cassadine (Maura West) had been there and “conned” Josslyn Jacks (Eden McCoy) the other half of Nina’s split heart pendant for Avery Corinthos-Jerome (Ava and Grace Scarola), Curtis and Nina continued to talk at Kelly’s.

Curtis asked if Nina was sure she wanted to give up the search, and she admitted that she hadn’t been totally truthful with Jax about the matter. Mentally, she was accepting giving up, but emotionally, she wasn’t ready to. Meanwhile, Carly told Jax she was going to fix things so their secret about Nelle’s presumed death wouldn’t come out and Nina would never have to know. Jax left, while Carly continued to plot how to get the necklace back.

GH Spoilers – Nina Reeves Is Grieved, Finding Out That She Buried Her Daughter!

General Hospital spoilers tease that the secret that Carly is trying so hard to keep will be revealed, and Nina will find out that Nelle had the other half of the necklace! She buried the body said to be Nelle’s herself, and now she grieves. Nina tried to help Nelle, tried to help her become a better person, but now she blames herself for not trying harder. She tried to show her a true mother’s love even when she didn’t know she was Nelle’s birth mother, hoping it would change her.

But when Nelle really needed her – or should we say tried to use her – she didn’t come through. This was at Nelle’s custody hearing over Wiley Corinthos (Erik and Theodore Olson). Nelle had gone to the extreme of blackmailing Julian Jerome (William DeVry) into marrying her, just so she would look more stable for the court. She had also asked Nina to be a character witness for her, and when Nina got to the witness stand, she just could not. She truly didn’t think that Nelle would be a good parent to Wiley. She will blame herself for other missed opportunities to try and “fix” her wayward birth daughter, but in truth, she could not have.

Nelle’s choices were Nelle’s choices and Nina would have had to have found her as a young child to make a difference, and obviously she could not have. Nina was in a twenty-five year coma when Nelle was being raised by Frank Benson (James Patrick Stuart, in the flashback episode). Nina didn’t even know her baby survived until after her mother, Madeline Reeves (Donna Mills) died and Nina received her effects from Pentonville Prison! But she will continue to blame herself and grieve the missed opportunities to effect positive changes in Nelle’s life and in Nelle herself once the truth comes out!