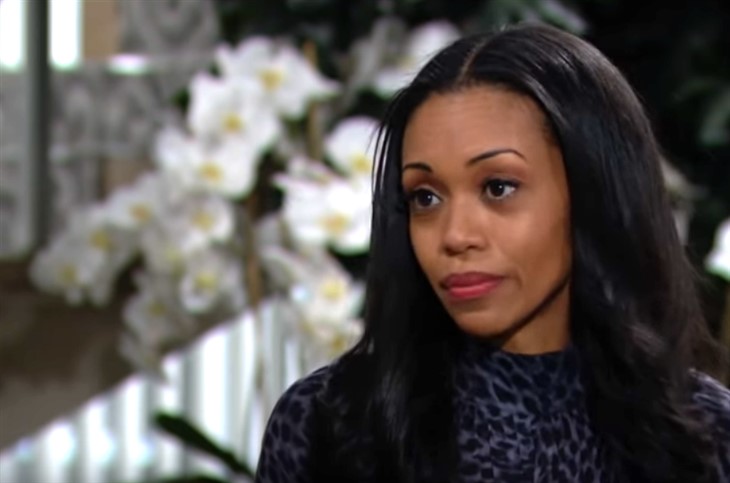 The Young and the Restless spoilers reveal that Amanda Sinclair (Mishael Morgan) finds out about Naya Benedict’s (Ptosha Storey) lie. She is furious and suspects they were directly involved in her father’s death. Amanda vows to come after the family and make them pay if she learns they were responsible for Richard Nealon’s death. However, could she suffer the same fate as her father?

The Young And The Restless Spoilers – Denise Tolliver’s Bombshell

Y&R spoilers reveal that Amanda sends Denise on another assignment. Now that she is no longer working on Sutton Ames’ (Jack Landron) defense case, she is free to do what she really feels is important. For Amanda, that is to find out the truth about what happened to her father. She asks Denise Tolliver (Telma Hopkins) to find out the truth.

Denise will contact Amanda this week and inform her that Naya lied about not talking to Richard. Not only did Naya pick up the phone before Richard’s death, but they had a five-minute conversation.

Amanda will get fed up with all the secrets and lies. The only thing she wants to know is what really happened to her father. If Sutton Ames (Jack Landron) is so innocent, then why won’t the family just tell the truth? Fans know it’s because Sutton and Naya are hiding something huge. However, is it really what we think or could there be an unexpected twist in this story?

The Young And The Restless Spoilers – Confronting Naya Benedict

The Young and the Restless spoilers reveal that Amanda shares Denise’s information with Devon Hamilton (Bryton James). Amanda thinks that the best course of action is to be upfront and direct with Naya. She arranges a meeting not telling Naya what it is about. Then, she asks Naya to once again answer a question. Did she ever speak to Richard before his death? Naya lies and says no and that is when Amanda shows her the proof. Naya has an interesting response, according to Morgan’s interview with Soap Opera Digest.

Y&R Spoilers – The Risk Of Revenge

In the interview, Morgan explains that if Amanda finds out her family was responsible for Richard’s death, she will “go after them.” However, we have to wonder if this will put Amanda in danger. For the family to go to these lengths to hide their secrets, it must be something massive. Amanda might be their blood, but they have already proven that their secrets are more important than family, or someone’s life. If Amanda does end up in danger, will she lose her life? We will have to keep watching the CBS soap to find out what happens next with this storyline.