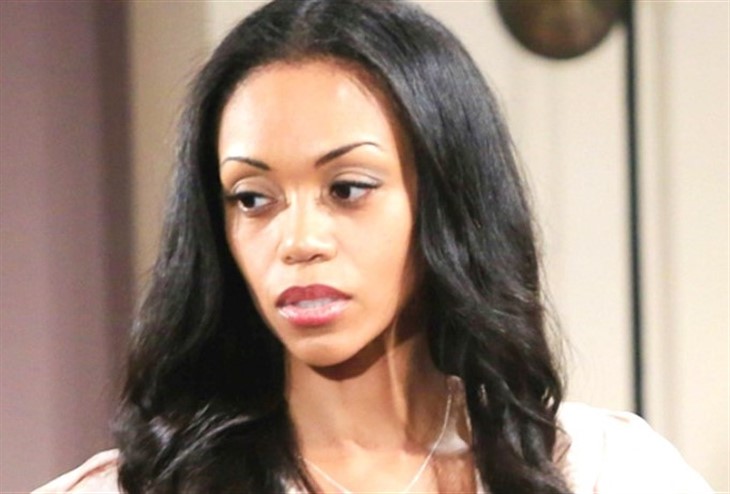 The Young and the Restless (Y&R) spoilers document that in Genoa City, Wisconsin Amanda Sinclair (Mishael Morgan) allowed herself to begin falling in love with Devon Hamilton (Bryton James). That followed a brief interest in his cousin, Nate Hastings (Sean Dominic). But she can’t allow herself to be distracted by either man now that her mother, Naya Benedict (Ptosha Storey), has requested help.

Devon’s presence in Amanda’s Grand Phoenix suite was fitting. Once again he was present during a meaningful moment with Amanda’s recently identified biological mother.

The Young And The Restless Spoilers – Some Couples Are Destined

Viewers likely had misgivings about the possibility that Nate and Amanda might be tagged as Namanda in the recent past. It wasn’t because that nickname is better than Ate, would would mash the first letter of Amanda’s name and the last two of Nate’s. Instead, the audience sensed the connection that Devon felt the moment he saw Morgan’s second character standing in the penthouse hallway in 2019.

Y&R’s contract with Morgan allowed her to return to the cast, following her departure one year earlier. The actor had a second child and wanted to spend time with her family. However, she left on amicable terms and kept the door ajar to a comeback, which happened.

The chemistry between Morgan and James allowed Hilary Hamilton (Morgan’s initial Y&R role) and Devon to create a great love story during the last decade. Hevon was one of the show’s top 2010 couples. But Hilary’s death appeared to make a reboot impossible.

One of the great aspects about the art form that is daytime involves its endless creative possibilities. So, Hilary’s ghostly appearances preceded the introduction of her previously unknown identical twin sister. That served as a nice bridge between both roles and allowed Morgan’s return to the set to be cloaked.

From the instant Amanda appeared, with Colin Atkinson’s (Tristan Rogers) manipulative attempt to steal the remainder of Katherine Chancellor’s (Jeanne Cooper) inheritance, through Devon’s apparent, temporary break from Elena Dawson (Brytni Sarpy), and through to Amanda learning about that duo’s ongoing involvement, the fans suspected James and Morgan’s characters would be tied romantically. But will that now realized status continue?

The Young And The Restless (Y&R) Spoilers: Abby’s Beautiful Baby Plans – Will Chance Be Part Of Them? https://t.co/J4ODGbM9rS pic.twitter.com/FfBnW0Hsmw

Hilary believed that Rose Turner (Leslie Stevens) was her mother. In fact, she was the aunt who raised her after Naya’s parents arranged for both twins to live without their mother.

So, the skillful expansion of Amanda’s (and Hilary’s) backstory allows Morgan to work this character’s arc differently. Naya’s existence puts Amanda on a different course than Hilary.

As for Devon, his continued inclusion in Amanda’s developing family story implies that he’ll be part of it. The drama will involve whether Amanda wants him to be a friend, if that, or more going forward.