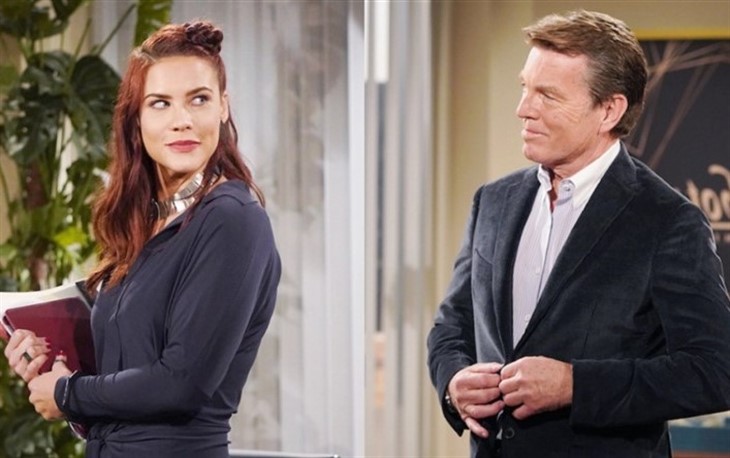 The Young and the Restless (Y&R) spoilers tease that Sally Spectra (Courtney Hope) isn’t about to release her talons from one of the most eligible bachelors in Genoa City Wisconsin. According to our inside source at CBS Sally is about to launch a charm offensive designed to get her back in Jack Abbott’s (Peter Bergman)’s good graces.

The Young And The Restless Spoilers – Sally Spectra A Splendid Conniver

Sally and Jack were getting chummy with champagne flowing freely between them over the holidays. Sally was practically drooling over the handsome older gazillionaire and he was, well, let’s just say he had gone without a female presence in his life for quite a long time.

They seemed to spark and the show milked the flirting and long gazes and this lead to a division among fans who thought the May December age gap was more like a cradle robbing situation.

For his part, Jack has been and always be a lady’s man. He’s got charm, good looks, and a bulging pocketbook—what’s not to like?

Could it be that he took so soon to Sally because she reminds him of his ex Phyllis Newman (Michelle Stafford)? It could be, both are out there in terms of fashion, brassiness and ambition. Oh, and the red hair thingy, too. Once Phyllis got wind of what was going on she vowed to put a stop to it and what Phyllis wants she usually gets.

Except that Little Red is just as determined as Big Red when it comes to snagging Smilin’ Jack. It looks bad for Sally now, Jack has dumped her over her deceit and nastiness to Phyllis. Sally isn’t taking no for an answer, however.

How far is she willing to go to get Jack to look at her like he once did? First, she has to get past Phyllis who has made it look like Sally sabotaged her, with Jack witnessing the whole thing. According to our CBS insider, Sally could be about to use her trademark borderline psychotic moves into play in order to squash Phyllis and win Jack. Back in LA Sally kidnapped the woman who was displeasing her and getting in her way—will she turn to the dark side again in order to get her hands on the man of her dreams?