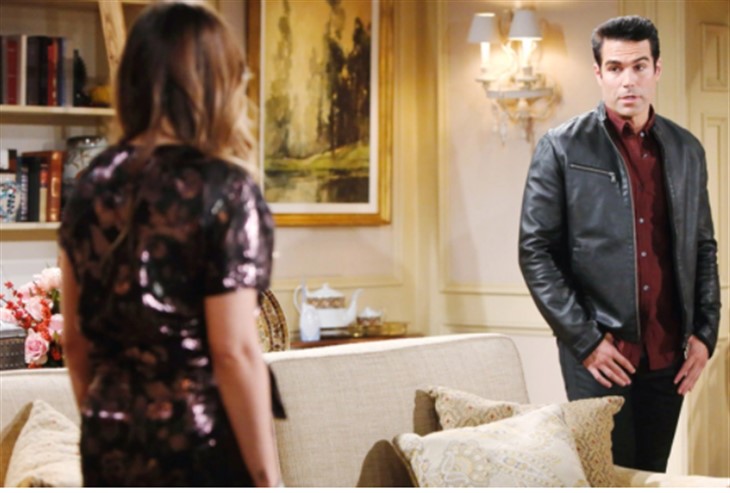 The Young and the Restless spoilers document that Sharon Rosales (Sharon Case) has allowed herself to be drawn back to Adam Newman (Mark Grossman). This one-time pairing, that was teased as a comeback couple more than a year ago, has stronger revival momentum than at any time since then.

Meanwhile, Rey Rosales (Jordi Vilasuso) and Chelsea Lawson (Melissa Claire Egan) are in different stages of realization. Rey has seen evidence that Sharon still has feelings for Adam. Chelsea, trapped inside her own body due to general paralysis and being muted by an inability to speak, senses that Adam is playing her for a fool.

The Young And The Restless Spoilers – Shadam Again Would Be Great

The subject header of this section projects what Sharon and Adam feel when they’re together. It also reflects what they wanted when choosing to engage in a mutual kiss at Society.

A Shadam sequel would be great if one believes that a chaotic past represents goodness. Certainly, the enduring electricity that exists between Sharon and Adam can’t be denied. But the dysfunctional nature of this pairing isn’t good for anyone, starting with them.

However, some viewers likely feel that another edition of Shadam seems like it’s bound to happen. There’s no doubt that this particular pairing provides plenty of dramatic opportunities for Y&R’s writing staff. So, it could happen based on that alone.

Y&R Spoilers – What About Chey’s Feelings?

Chey is the mashed nickname that represents Chelsea and Rey. No, they aren’t a couple and aren’t assumed to become one. Though on Y&R this future duo can’t be ruled out.

Chelsea is such a poor soul. She’s likely in her fixed physical position because Adam’s deranged abduction plot created that result. Egan’s character deserves infinitely better than what Adam is giving her.

Rey is a good guy. He was hurt badly by Mia Rosales (Noemi Gonzalez), which fully plays into his reaction to Sharon’s mistreatment of him now.

The Young And The Restless Spoilers: Summer Gets A Mysterious Message, Kyle Has Some Explaining To Dohttps://t.co/vbiKOnynUe

The Young And The Restless Spoilers – Control Must Soon Be Taken

If Chelsea and Rey don’t take control of their lives, Adam and Sharon will decide what happens. Chelsea has a tough, but not impossible task in trying to make decisions based on her circumstances. But she’s resilient. So noteworthy progress can’t be ruled out in the near future.

As for Rey, he’s already given Sharon an ultimatum. Adam knows that he’s on notice as well. So, Sharon better choose Shey, or her new marriage will be rightly short-lived.