Bold And The Beautiful Spoilers: Will Hope And Wyatt Forgive Bill? 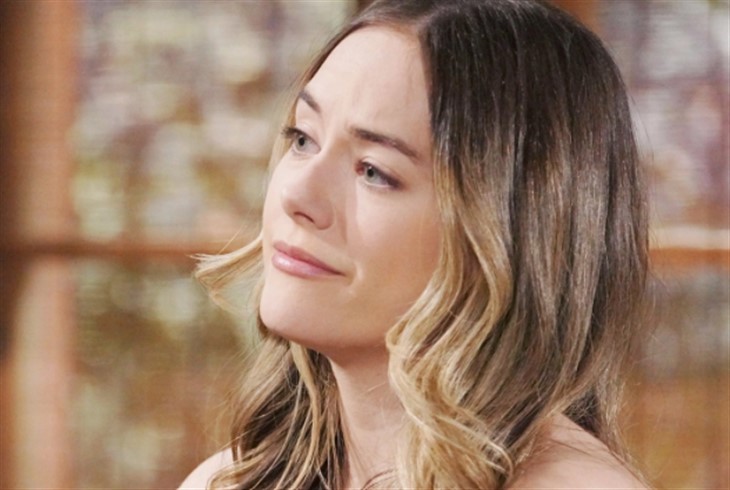 Bold and the Beautiful (B&B) spoilers show Bill Spencer (Don Diamont) is trying to keep a secret that could destroy his family. He and his son Liam Spencer (Scott Clifton) were out for a drive. Liam accidentally hit Vincent Walker (Joe LoCicero) with the car. Liam passed out which gave Bill the chance to cover up the accident. He took Liam and left the scene. He threw away Vinny’s wallet and cell phone.

Then Bill sold his car on The Bold and the Beautiful, even though it was rare and important to him. Bill wanted Liam to keep the secret because he believed that Liam would go to jail for murder. Liam had a reason to want to kill Vinny. Liam and his wife Hope Spencer (Annika Noelle) were having trouble with their marriage because Liam had a one-night stand with Steffy Forrester (Jacqueline MacInnes Wood).

According to B&B recaps and spoilers, Steffy found out that she was pregnant and needed to get a paternity test. The test showed that Liam was the father of Steffy’s baby. Later Thomas Forrester (Matthew Atkinson) found out the truth that Dr. John Finnegan (Tanner Novlan) was the father of Steffy’s baby because Vinny altered the paternity test results.

Vinny wanted to try to get Thomas and Hope together on The Bold and the Beautiful soap opera because he knew that Thomas cared about Hope. Bill believes that the authorities would think that Liam would kill Vinny on purpose because of the altered paternity test. Liam has been having trouble keeping the secret. Liam’s brother Wyatt Spencer (Darin Brooks) noticed that Liam is struggling with a problem. However, Bill told Wyatt that Liam was still upset about having problems with his marriage.

Wyatt is concerned about Liam and Bill. He knows that Bill sold his car. Wyatt was shocked to find out that Bill sold the car because it was important to him. Recently Wyatt interrupted Bill and Thomas who were having a disagreement. Thomas has been upset about losing Vinny. Thomas and Vinny had been friends since they were children. Bill told Thomas that he felt that Vinny got what he deserved because he altered the test results and had a criminal history.

The Bold and the Beautiful spoilers show Thomas was upset that Bill believed that Vinny deserved to die. Thomas wants to get justice for Vinny. Wyatt was able to get Thomas to leave before he and Bill came to blows. However, Wyatt was upset that Bill would have a callous view of Vinny’s death. Wyatt is concerned that Bill knows what is troubling Liam. Bill told Wyatt not to worry about Liam. However, Wyatt is still worried about Liam. Wyatt may find out what Bill is trying to keep secret.

Liam had wanted to tell Hope the truth about Vinny from the beginning on The Bold and the Beautiful. Bill encouraged Liam to keep the secret. Liam and Hope have found a way to reunite as a married couple. However, Hope could see that Liam was still having trouble.

Liam has told Hope that he is responsible for Vinny’s death on B&B. Hope was upset but feels that Liam was not completely at fault. She feels that Bill is the one who is to blame because Bill did not try to get Vinny’s help. He took Liam and drove away. Hope believes that Bill has turned the tragic death of Vinny into a crime that could take Liam away from her. Hope is angry with Bill for putting Liam’s future at risk.

Bold and the Beautiful spoilers show Hope and Wyatt will want Liam not to get into serious trouble for accidentally killing Vinny. Hope may believe that Bill needs to take responsibility for his part in Vinny’s death. However, Bill may convince Hope to keep the secret. Hope will not want to keep the secret. Will Hope resent Bill for putting Liam and her family’s future in jeopardy?

Wyatt will want to protect his family and keep it together. Will Wyatt be angry with Bill for covering up the truth about Vinny’s death? Will Wyatt side with Thomas and want Bill to pay for Vinny’s death because he put Liam and their family’s future in danger? Tune in to Bold and the Beautiful to find out if Hope and Wyatt will forgive Bill for covering up the way that Vinny died.