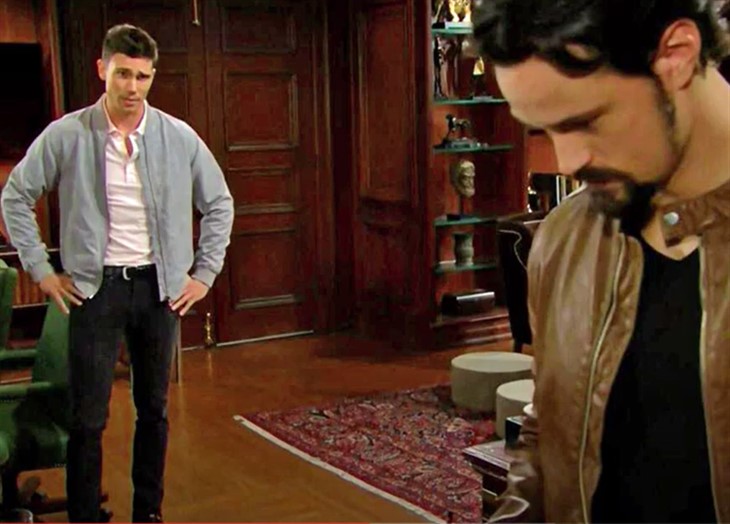 The Bold and the Beautiful spoilers reveal that Detective Sanchez (Jimmy Ray Valdez) investigates a crime, along with Lt. Baker (Dan Martin) is also present. Vinny Walker (Joe LoCicero) could end up dead. It is also teased that Steffy Forrester (Jacqueline MacInnes Wood) leaves the city and her boyfriend after learning a secret. Are all these events connected?

The Bold And The Beautiful Spoilers – Vinny Walker’s Cruel Scheme

B&B spoilers reveal that Vinny has been quite naughty. When Steffy had a paternity test done, she was sure John “Finn” Finnegan (Tanner Novlan) was the father of her baby. Instead, Finn wasn’t a match. Since the only other person Steffy slept with was Liam Spencer (Scott Clifton), he was assumed to be the baby daddy.

Now we are getting the impression that Vinny tampered with the DNA test. We know just a few months ago, Thomas Forrester (Matthew Atkinson) revealed that Vinny had a huge crush on Steffy. Is that why he hates Finn and messed with the paternity test?

Detective Sanchez investigates pretty much everything on the CBS soap. He even completed the report for Steffy and Bill Spencer’s (Don Diamont) accident. However, the fact that Lt. Baker is with him suggests the crime is serious. We are thinking it might be a homicide and the only person we can see the soap killing off right now is Vinny.

The Bold And The Beautiful Spoilers  – Two Men Make A Pact

The Bold and the Beautiful spoilers reveal that Thomas is starting to suspect Vinny switched the paternity test. Thomas confides in Steffy and Finn, then advises them to get a new test. Now, we have seen Finn start to get fed up. When Finn learns that Vinny could be responsible, he will want to confront him. Especially after the way Vinny treated him in the lab on Monday’s episode. The conversation could get heated and punches may get thrown. Suddenly, Vinny is laying on the floor and he’s dead. We don’t think Finn would murder Vinny. It is likely a tragic accident, but that’s not how the cops will see it. It’s possible Finn and Thomas could make a pact.

The Bold And The Beautiful Spoilers: Finn Fumes, Steffy Won’t Evict Liam From Her Lifehttps://t.co/i12znm2Y9d

It is teased that during the week of March 8, a shocking secret is discovered. Vinny’s role in the paternity switch might not be the secret it’s referring to. Viewers already know he’s involved, so it’s not shocking. However, finding out that Finn is tied to Vinny’s death would be surprising. It would also explain why a perfect relationship suddenly ends, why Steffy leaves L.A., and why Finn chases after her. It would also explain why Finn tries to prevent losing the woman he loves. All of that indicates that Steffy learns something about Finn and it upsets her so much she literally flees L.A. Thinking he’s capable of murder would certainly scare any woman, but can he explain what really happened? If so, will she even believe him?