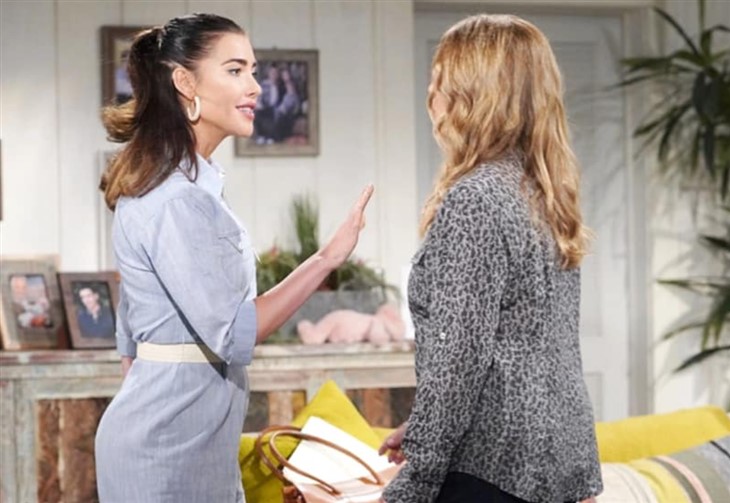 The Bold and the Beautiful (B&B) spoilers and updates tease that in Los Angeles Sheila Carter (Kimberlin Brown) may be setting up a sinister plot for Steffy Forrester (Jacqueline MacInnes Wood). Sheila wants to be part of the lives of her son John “Finn” Finnegan (Tanner Novlan) and grandson Hayes Finnegan (Piper Harriot). But Steffy has vowed never to let that happen. Sheila may be up to something that will force Steffy to give her what she wants.

Fans know that Steffy hates Sheila for everything she’s done for her family. She’ll do everything she can to keep her away from Hayes. But it has become clear that Sheila has no plans of doing that. She’ll fight for what she wants and that’s to be with Finn and Hayes.

The Bold And The Beautiful – Sheila Carter Stages Her Own Kidnapping

Sheila may do something unexpected and it’ll be much worse than just showing up at Steffy and Finn’s cliff house unexpectedly. The Bold and the Beautiful’s resident troublemaker may come up with a plan to kidnap herself and blame it all on Steffy. Everyone knows that Sheila can go to such extremes if she wants to but will the people around her believe that Steffy is capable of kidnapping?

Sheila needs to have a reliable accomplice to pull this major plot. That person will save Sheila from captivity and when that happens, she’ll pin it on Steffy. Of course, the latter will protest her innocence but her family and friends may have a hard time believing her because of her deep-seated hatred for Finn’s biological mother.

If all goes well, Sheila may demand to have quality time with Finn and Hayes in exchange for not pressing charges against Steffy? Will Sheila succeed? It’s a possible major plot twist that will surely leave fans at the edge of their seats. But for now, viewers just have to wait and see what’s next for Sheila and Steffy.

The Bold And The Beautiful – Steffy Forrester Delivers Ultimatum

In the meantime, Steffy may warn Finn that she’ll leave LA and bring Hayes and Kelly Spencer (Avalon and Collette Gray) if he doesn’t take care of Sheila.

As for Finn, he’ll turn to Hope Spencer (Annika Noelle) for help. He’ll share his struggles to protect his family but also get to know his birth mother. Hope understands Finn’s predicament and will offer support. He’ll be appreciative of Hope’s efforts even though she can’t really provide her with a solution to his current dilemma.