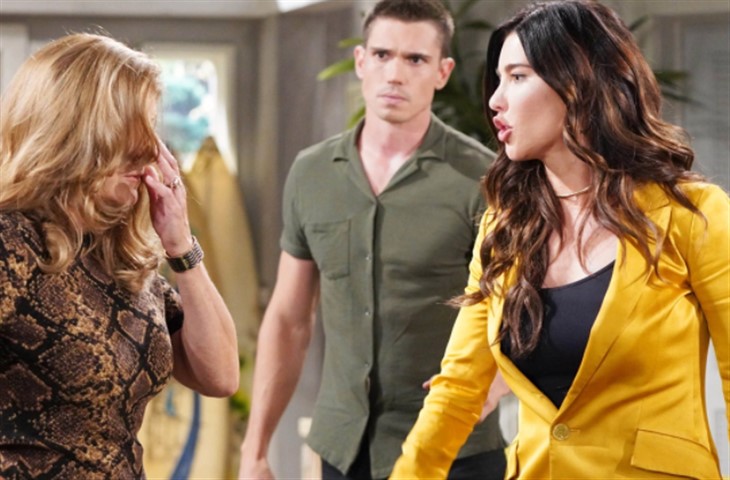 The Bold and the Beautiful (B&B) spoilers reveal that in Los Angeles Sheila Carter (Kimberlin Brown) shows up at the beach house to confront Steffy Forrester (Jacqueline MacInnes Wood). When the two women come face-to-face again, the situation will explode. Then, things take a turn when John “Finn” Finnegan (Tanner Novlan) is suddenly put on the spot.

B&B spoilers reveal that during the week of September 27, there will be a character returning. Details are still under wraps, but what is known is that this person will cause issues for the Forrester family, as well as for Liam Spencer (Scott Clifton) and Hope Logan Spencer (Annika Noelle). However, those are not the only ones affected.

It is confirmed that Sheila will make a new acquaintance who gives her deceptive advice. Could this be the same person that will affect the Forrester family and “Lope?”

It is confirmed that Sheila will go over to Steffy and Finn’s house. Steffy will be furious that her mother-in-law is showing up unannounced, uninvited and unwelcome once again. When “SINN” told Sheila goodbye at the hospital, they both meant it. It is teased that Sheila’s reason for going over to see Steffy is related to the deceptive advice she receives.

The Bold and the Beautiful spoilers The two women will have a nasty confrontation and according to the picture in the new issue of Soap Opera Digest, the volatile situation is about to explode. In the photo, Steffy and Sheila are facing each other and are practically nose-to-nose. Steffy looks prepared to fight but so does Sheila. The caption of the phone teases,

“Sheila has had it with her mouthy daughter-in-law, Steffy.”

The Bold and the Beautiful Spoilers: John Finnegan Blindsided

Steffy and Sheila are not alone, though. Finn is present during the unexpected confrontation. Novlan previously explained that Finn was forced to make a choice. Finn chose Steffy and Hayes Forrester Finnegan because that is his family. The actor also teased that Finn might be forced to fight Sheila because if he doesn’t, then he will lose Steffy and the baby.

During the week of September 27, Sheila will suddenly turn away from Steffy and put Finn on the spot. How will Finn handle this sudden turn of events and who is this mysterious person that gives Sheila deceptive advice about Steffy? Will Finn really fight his biological mother or will he once again feel conflicted? We will have to keep watching the CBS soap to find out how this story develops in the upcoming week.