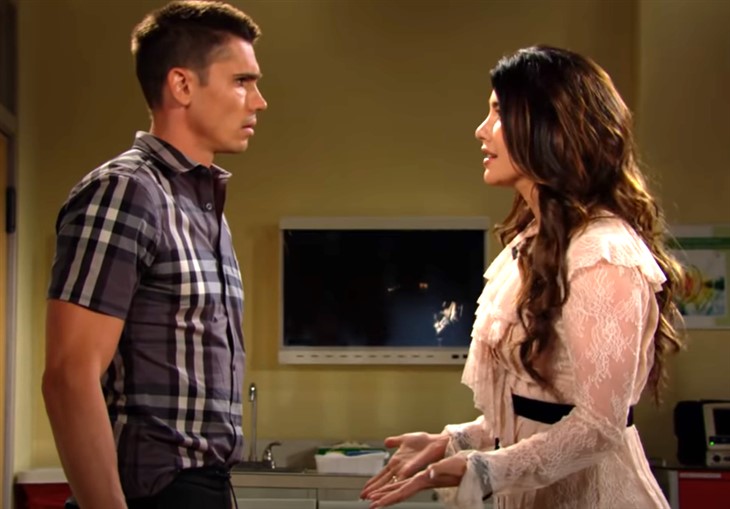 The Bold and the Beautiful (B&B) spoilers for Tuesday, September 7, 2021, reveal in Los Angeles Steffy Forrester not falling for Sheila Carter’s tricks because she knows who she’s dealing with and Finn does not.

The Bold And The Beautiful Spoilers: Steffy Has Had It With Sheila Carter…And John Finn Finnegan

Sheila (Kimberlin Brown) knew exactly what she was doing when she fainted in front of Finn (Tanner Novlan). She got his sympathies through his panic and now he wants to take care of her, convinced something must be terribly wrong.

When Steffy (Jacqueline MacInnes Wood) asks Finn why he’s so dedicated to this woman after she’s told him all the evil and nutty things she has done, he replies that she’s his mother and he can’t help but care. This is a woman he just met and Steffy thinks that’s a slap in the face to the woman who raised him

Steffy also thinks the man she just kinda-sorta married is a pushover because she knows Sheila is faking whatever it is that ails her. And she tells Sheila just that. Sheila doth protest too much but Steffy knows the game and puts Sheila on warning. She’s not going to let her anywhere near Hayes and she’s certainly not going to let her ruin her happiness. This doesn’t bode well with Sheila, who is now angrier with Steffy than ever. Uh-oh!

B&B Spoilers – Paris Buckingham Might Have A Big Problem

Somehow all of Finn’s problems have now become Paris’ (Diamond White) problems and she is obsessed with the family drama he is now enduring. It’s the only thing she can think about lately and maybe she is a little too close to the situation — literally. She can’t stop talking about Finn and Steffy and all the trouble Sheila is causing and Zende (Delon De Metz) wonders what the heck is going on.

Why is she more interested in Finn than him? Is she just intrigued by this sordid story of Sheila Carter or is she intrigued by Finn altogether? Does she even think about Zende at all anymore? Zende really wants to know. Will Paris even have an answer or understand it all herself? Stay tuned to The Bold and the Beautiful weekdays to see how these stories play out.