The Bold And The Beautiful Spoilers And Rumors: Dollar Bill Spencer Hiding Something From His Past? 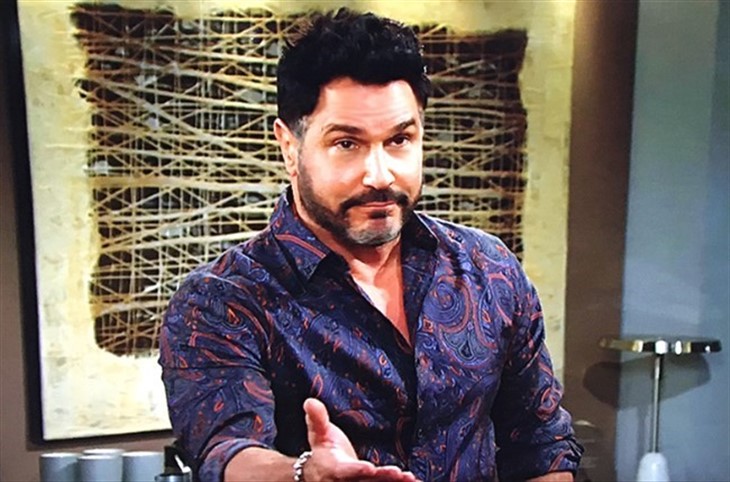 The Bold and The Beautiful spoilers tease that Dollar Bill Spencer (Don Diamont) acts like he’s done prison time. When he has been telling his son Liam Spencer (Scott Clifton) that he couldn’t just call 911 after he ran into Vinny Walker (Joe LoCicero) and everything would have to be covered up like it was a murder, that sounds like someone who’s done time.

Could future episodes of The Bold and The Beautiful reveal that Dollar Bill is hiding something about his past before coming to LA?

The Bold And The Beautiful Spoilers – Not Much Is Known About Bill Spencer, Jr. Before His Coming To Los Angeles

Longtime viewers of the Bold and The Beautiful will remember Bill Spencer Sr. (James Storm) was the founder and owner of Spencer Publications in Los Angeles. It was not until after Bill, Sr. died that Bill, Jr. otherwise known as “Dollar Bill” came to The Bold and The Beautiful and Los Angeles upon finding out his late father split the company fifty – fifty between him and his sister Karen Spencer (Joanna Johnson). Karen now runs the east coast division of Spencer Publications and lives in New York City, while Bill runs the west coast division and of course lives in Los Angeles.

The Bold and The Beautiful fans will also remember that Dollar Bill has always been a cutthroat businessman and has not always gone about business deals or anything else in a an up and up sort of way – and he has made death threats in the past.

In fact, B&B spoilers and recaps reveal Dollar Bill easily threatened to kill Amber Moore (Adrienne Frantz) a troublemaker who tried to pass off a baby she conceived after a one-night stand with Oliver Jones (Zack Conroy) as Liam’s. Bill told Katie Logan Spencer (Heather Tom) to whom he was married at the time, that he was going to kill Amber and that was what gave her the heart attack that led to her brother Storm Logan (William DeVry) committing suicide so she could have his heart transplanted into her!

Bill indeed did try to push Amber off a cliff on The Bold and the Beautiful and would have if Steffy Forrester (Jacqueline Macinnes Wood) had not gotten there in time to prevent it and saved Amber’s life!

Viewers of the Bold and The Beautiful will agree that Dollar Bill has never acted like anything other than a criminal many times since he has been on The Bold and The Beautiful. Bill was forty-six years old when he came to Los Angeles to run his father’s magazine company and nothing much is known about those forty-six years except that he was involved with Quinn Fuller Forrester (Rena Sofer) while in Las Vegas, where he fathered his son with her, Wyatt Spencer (Darin Brooks) and Kelly Hopkins (uncast character) who was Liam’s mother, and whom Kelly Spencer (Colette and Avalon Gray) was named after.

Forty-six years with no one alive to know anything much that Dollar Bill was doing all that time, except for Quinn having had apparently a one night stand with him which produced Wyatt, could leave a lot of questions about Dollar Bill during that time.

The Young and the Restless Spoilers: Sally's Heart Hurting But Jack Takes Her Back, Love Blooms #yr #youngandrestlesshttps://t.co/GZcdRJEBey

The Bold and the Beautiful spoilers show neither Quinn nor Shauna Fulton (Denise Richards) have said much about Dollar Bill’s past, although apparently Quinn was involved with Dollar Bill around the same time Shauna was involved with Storm, presumably both in Las Vegas at that time.

It is known that Dollar Bill does own a hotel in Las Vegas, and he may have been involved with the casino business, which in Las Vegas is heavily involved with the Mafia. The town of Las Vegas and all its casinos, legal brothels, and other shady businesses was founded by Mafia members so Dollar Bill could very likely have a criminal past, and even have been in business with mob members!

One thing is for certain – he doesn’t operate like a fine upstanding citizen on the B&B soap opera! He doesn’t trust the police, and that is one big red flag right there!