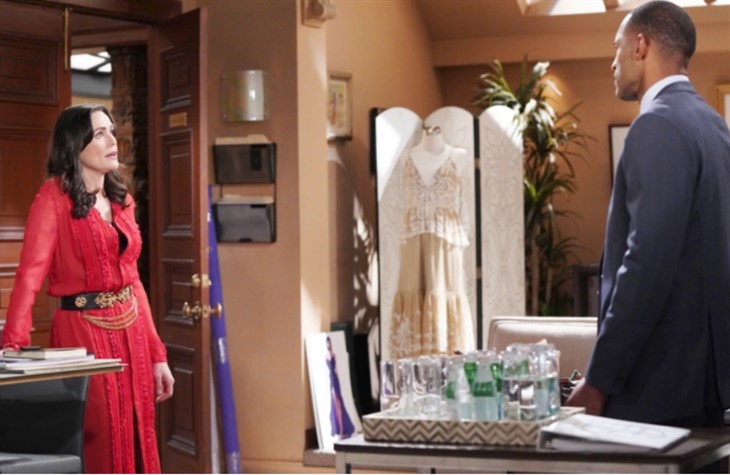 The Bold and the Beautiful spoilers document that Quinn Fuller Forrester (Rena Sofer) currently believes that her secret will be kept. Carter Walton (Lawrence Saint-Victor) thinks the same.

But this is B&B. So, the reveal about their cavort will certainly happen. Queric is sure to be over then or even before the climax happens. Eric Forrester (John McCook) will be staggered by the reveal, as his fears about Quinn’s dishonesty will be confirmed.

It’s fair to wonder if Carter, who’s single now, and Quinn, who will regain that status, will then become a couple?

The Bold And The Beautiful Spoilers – Seeds Of Doubt Sewn

Quinn’s kisses with Ridge Forrester (Thorsten Kaye) naturally made Eric doubt her love. But they got past that vow betrayal.

Eric was dismayed when learning the full extent of Quinn’s involvement in her plan to break Ridge’s marriage to Brooke Logan Forrester (Katherine Kelly Lang). Shauna Fulton (Denise Richards) was a willing partner in the scheme that eventually led to Ridge believing he’d signed divorce papers and married Richards’ character on the strip in Las Vegas, Nevada.

McCook’s character appeared to have forgiven his wife when welcoming her back to the mansion. But time demonstrated that his misgivings have overcome the love he has for her.

Carter was heartbroken when he learned that Zoe Buckingham (Kiara Barnes) was trying to initiate a relationship with another man during Zarter’s period of engagement. She pursued Zende Forrester Dominguez (Delon de Metz) for months while keeping Carter as a fallback option if ZoZende didn’t develop.

The anger that Zoe saw reflected Carter’s pride. He was crushed that a woman he thought would be his bride and future mother of his children thought so little of him. That set the stage for Quinn’s interest to be acted upon.

The Bold And The Beautiful (B&B) Spoilers Thursday, May 6: Quinn Has To Cover for Herself Fasthttps://t.co/UQughu8P7h

Quinn knows that what she did with Carter was wrong. But she’s already justifying her actions by claiming that Eric’s distance was the problem. Well, his feelings exist because of Quinn’s pattern of bad behavior.

Eric took note of Quinn’s excuses regarding the breaking Bridge fail. She tried to excuse her actions away, which was a harbinger of what’s happened now.

Assuming Eric opts for divorce, Quinn and Carter will both be available. They certainly have chemistry and could then form into what was, but no longer is an unlikely couple.

The Bold And The Beautiful (B&B) Spoilers: Justin Takes Over Spencer…

The Bold And The Beautiful (B&B) Spoilers: Dollar Bill Is Furious, Can’t…