The Bold And The Beautiful Spoilers: Liam Crumbles Under Pressure 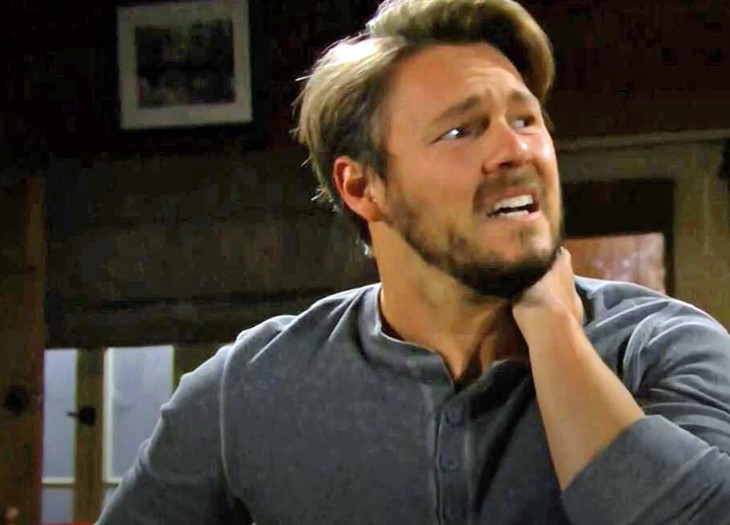 Liam is a good person, with noted scratches in his armor when it comes to the Lope-Steam saga. Clifton’s character internalizes his experiences in life because he has an analytical personality.

Hope Spencer (Annika Noelle) sees Liam differently than Bill Spencer (Don Diamont) does. That perception is already proving dangerous, as Liam’s return to the cabin is a double-edged sword.

Bill insisted that Liam needed to return to everyday life. He had to do it or Hope and everyone else would suspect that something was seriously wrong. So, Liam implemented his dad’s advice.

As had to be expected, Vincent Walker’s (Joe Lo Cicero) name has come up since Liam agreed to move back to the cabin. But it was the moving images of Vinny that really hit hard.

The elixir of being back with Hope and their children isn’t enough to overcome the all-encompassing guilt that Liam feels. It is clearly producing noticeable effects.

Vinny is gone forever. Liam believes that the impact of the car hitting him in Bel Air, Los Angeles, California, was the sole reason Lo Cicero’s character died.

The above is yet to be determined, as Vinny could have been near death before he was hit by the car. But in the meantime, Liam understandably believes, as does Bill, that Vinny was killed by the sports car.

Liam and Bill’s involvement in Vinny’s death can’t possibly remain a secret for much longer. In soap time that could be anywhere from weeks to months.

The Bold And The Beautiful (B&B) Spoilers: Douglas Wants Hope And Thomas Together – How Far Will He Go?
https://t.co/MtP9ry6nbC

It won’t be easy for Liam to admit what happened. There may be short-term consequences that result in him being arrested or even imprisoned. But something has to give.

Thomas Forrester (Matthew Atkinson) is intent on finding Vinny’s killer. That produces tension between him and Bill. Hope will be affected by Thomas’s ongoing efforts as well.

But along the way, Hope’s persistence will serve to help her husband. Liam must clear his conscience and then face whatever consequences come from the nature of Vinny’s death being revealed.

Days Of Our Lives Spoilers: Jan Saves Chloe, But Only If She Kills Claire