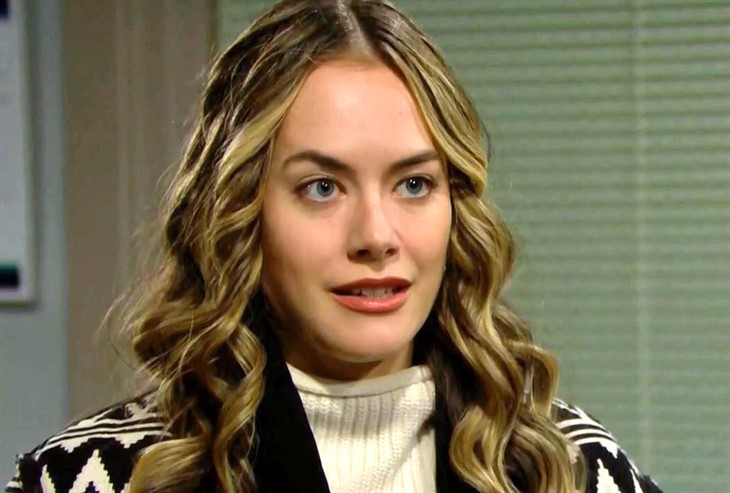 The Bold and the Beautiful spoilers reveal that in Los Angeles when the “Steam” secret comes out, Hope Logan (Annika Noelle) might not react the way fans predict. In fact, head writer Bradley Bell said that viewers should expect the unexpected. Could he have been referring to Hope turning the tables and dropping her own huge bombshell?

The Bold And The Beautiful Spoilers – Liam Spencer’s Personality Change

B&B spoilers reveal that Liam will plan to tell Hope the truth, but backs out at the last minute. Then, he ends up agreeing with what Steffy Forrester (Jacqueline MacInnes Wood) has been saying. That it would be better to act like nothing happened. The only problem with that is Liam can’t seem to do it. He goes through a personality change and gets very moody. He starts to isolate himself from Hope and the children. He thinks that it’s going unnoticed, but it isn’t.

Bell told Soap Opera Digest that the secret would carry through 2021. He said that it will be a huge story featuring three families in the center: the Forresters, Logans and Spencers. He also teased that when Hope does find out the truth, to expect the unexpected. So, what could that possibly mean?

The Bold And The Beautiful Spoilers – Hope Logan Figures It Out

The Bold and the Beautiful spoilers reveal that Hope usually reacts to things in a predictable way. However, we could be in for a surprise when she is told that Liam and Steffy slept together the night Thomas Forrester (Matthew Atkinson) kissed the mannequin. Since it is hinted that this secret will go on for nearly a year, that gives Hope a lot of time to figure out what “Steam” is keeping from her.

I mean, let’s think about it. If your husband and his ex are arguing about keeping the truth from you, what are you going to think? When you confront them and they come up with a lame explanation, you are going to know something is off. Eventually, you will figure out what they are hiding. The same goes for Hope… she will figure out the truth on her own, but stays quiet about it until the big reveal.

Could Hope end up dropping a bombshell of her own? Perhaps in her anger over Liam’s betrayal she might have turned to someone else. The one person Liam would never be able to stand her being with is Thomas. So, could her big bombshell be that not only did she already know the truth, but has been getting affection from Thomas? It’s a possibility, but we will have to keep watching the CBS soap to see what the writers have planned for the characters.