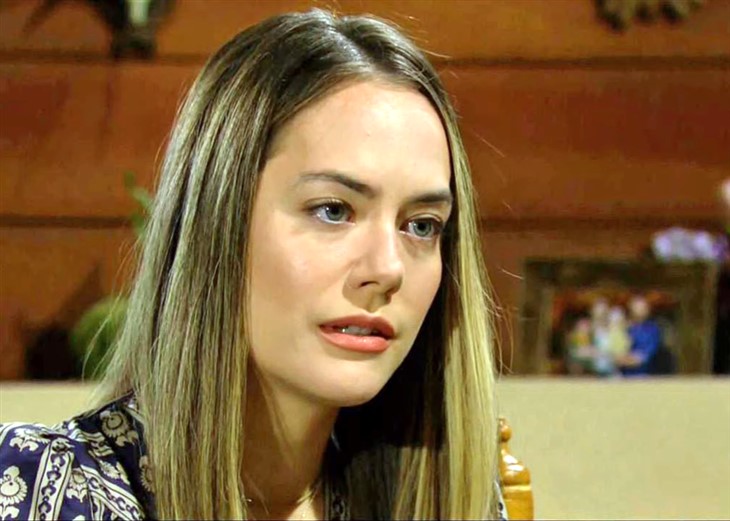 The Bold and the Beautiful spoilers hint that Hope Spencer (Annika Noelle) may find herself becoming worried about her line, Hope For The Future. Hope has had a lot on her plate since her father, Deacon Sharpe (Sean Kanan) has come back. Her family was not happy to hear about Deacon’s return and is giving her a lot of pushback.

However, this will not be the only thing Hope will have to be concerned about in upcoming The Bold and the Beautiful episodes. As Hope will so sense some trouble heading towards her line, Hope For The Future.

The Bold and The Beautiful Spoilers – Thomas Forrester, Paris Buckingham, And Zende Forrester

It seems that there is a storyline developing between Thomas Forrester (Matthew Atkinson), Paris Buckingham (Diamond White), and Zende Forrester (Delon de Metz) in upcoming episodes. Paris who has just left from being involved in Steffy Forrester (Jacqueline Macinnes Wood) and Finn Finnegan(Tanner Novian) storyline involving Sheila Carter (Kimberlin Brown) will find herself in a new storyline.

The Bold and the Beautiful spoilers show Paris and Thomas have decided to stay with each other after Thomas’s deal fell through for his new place. As well as it seeming that Thomas may be developing an interest in Paris. It would be no surprise if this interest turns into Thomas trying to pursue Paris which, could create conflict between the three.

It seems like viewers are not the only ones who will see the upcoming conflict between Zende and Thomas in future episodes. It seems that Hope will continue to hear good things about Paris and Zende’s relationship and be happy for the two of them. However, there may be signs that she catches on to that will make her wonder how Thomas feels about Paris.

According to B&B spoilers, Hope might start to see how Thomas is starting to grow interested in Paris. Could he be talking about Paris a lot of around her or could she be noticing something about his interactions with her? Whatever it is, it will have Hope worrying about the conflict that could result from it and how it might affect the working relationship between Thomas and Zende. Could there be a conflict between Thomas and Zende in upcoming episodes? If so will Hope’s line be affected because of it?