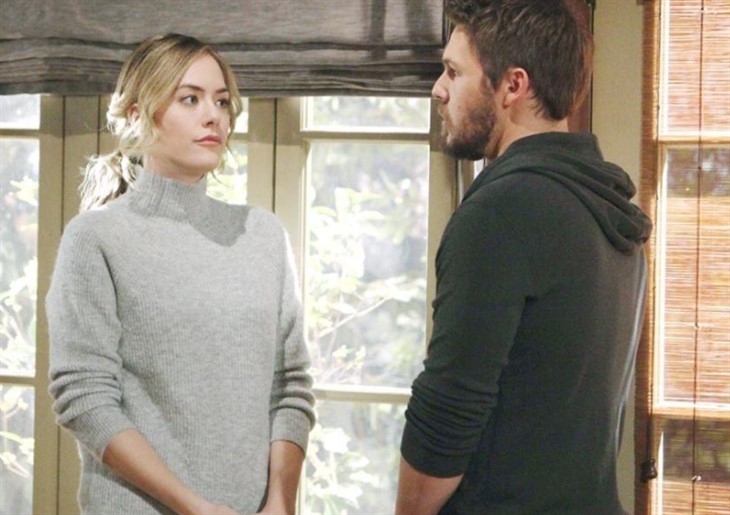 The Bold and the Beautiful spoilers tease that Hope Spencer (Annika Noelle) will be totally devastated next month. What she learns will immediately alter Lope’s trajectory.

The Bold And The Beautiful Spoilers – Liam Spencer Breaks Vows

Lope fans are outraged that Liam allowed himself to reconnect with Steffy Forrester (Jacqueline MacInnes Wood). He didn’t have to go to the cliff house after thinking he saw Hope and Thomas kissing. But he did because of his seemingly endless pattern of vacillating between both of the women he loves.

The last paragraph’s ender is a main reason why there’s been so much drama in this triangle that is Hope, Liam, and Steffy. Clifton’s character simply can’t get himself to commit to one woman. Plus, he is rightfully obligated to be with the daughters he had with each lady.

B&B Spoilers – Steffy Forrester Is The Other Problem Right Now

Steffy allowed Liam to reconnect with her. She didn’t have to do that and loneliness is off the table as an explanation this time.

The Bold and the Beautiful fans know that Steffy’s spin-out happened because of the intense feelings of isolation she was feeling. That, combined with her continued grieving of Steam had her longing for Liam. But then the motorcycle accident happened and John Finnegan (Tanner Novlan) appeared.

Finn should have been enough of a deterrent for Steffy. But he wasn’t. That fact won’t be lost on him when he learns the messy truth that’s teased to be revealed in January on B&B.

The Bold And The Beautiful Spoilers – Hope Logan Stands Strong

Hope was devastated in the past, when she saw Liam and Steffy kissing in the backyard at the cliff house. That was part of a setup that Steffy and Thomas planned.

Thomas can’t be faulted this time. No, Liam can and will.

The Bold And The Beautiful Spoilers: The Worst B&B Characters Of 2020 Revealed https://t.co/bGTP1TI9jV pic.twitter.com/J9Ypgs6ZkM

Noelle’s character has endured so much since Beth Spencer (Madeline Valdez and River Davidson) was stolen from her at birth. Hope and Liam fought so hard to reconcile and then remarry. And Liam throws that all away after some drinks and an eye connect with Steffy?

The time has come for Hope Logan, with the name revert noted, to write Liam off. He’s earned a fierce rebuke. Viewers will see how that plays out in early 2021 on B&B.

SOS is a leading source for everything linked to The Bold and the Beautiful. Check back regularly for B&B spoilers, soap comings and goings, and Bold and Beautiful 2021 news!