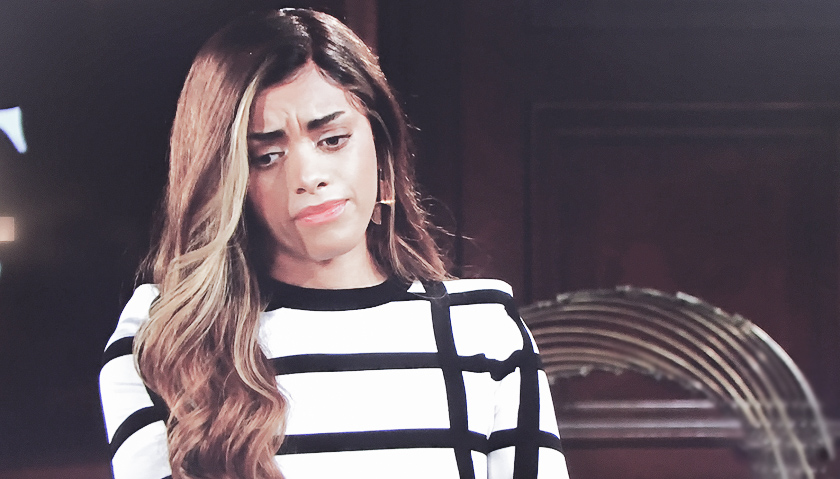 The Bold and the Beautiful spoilers reveal that in Los Angeles Zoe Buckingham (Kiara Barnes) gave her sister specific orders to leave L.A., reject the job offer and disappear. It seems that Paris Buckingham (Diamond White) was going to do all that. However, Zende Forrester (Delon de Metz) convinces Paris to stay in L.A., take the amazing job and follow her heart. Then, the two share a kiss.

B&B spoilers reveal that Paris was so excited to tell her sister about the amazing job opportunity she was offered. However, she didn’t get a congratulations or get asked questions about the job. Instead, Zoe demanded she turn it down and leave the city immediately. Even though Paris called her out for being jealous, it seems that the social worker is considering doing what Zoe said.

According to the new issue of Soap Opera Digest, Zende meets up with Paris and the two have a chat. He advises her to stay in L.A. and take the job with the Forrester Foundation. Then, he gives the young woman a sweet kiss. It is stated that the smooch does not sit well with Zoe and neither does her orders being disobeyed.

The Bold and the Beautiful spoilers reveal that it seems the kiss bothers Zoe more than anything, but why? Is she still conflicted between Zende and Carter Walton (Lawrence Saint-Victor)? If so, then she shouldn’t be planning a wedding! As for the flirtation that was going on between Zende and Zoe, actor Delon de Metz said that it was getting too serious and Zende didn’t want to mess up his friendship with Carter. So naturally you move on to the next best thing… the little sister.

The Bold And The Beautiful Spoilers: Jealousy And Confusion

When it comes to why Zoe is really jealous of Zende and Paris’ relationship, actress Kiara Barnes admitted to the magazine that there is a lot of confusion.

“Deep down, I do think Carter is the one for Zoe but there is a side to her that’s like, ‘What if I’m missing out on something?’ She’s so attached to the ‘what if?’ When Zende came to town, he was not anything serious but there was definitely an energy between them.They work really well together, and I think it is starting to make her second-guess, like, ‘Hold on. Let me pump the brakes with Carter before I make this life-altering decision.”

What do you think of Zende convincing Paris to stay in L.A. and take the job with the Forrester Foundation? How do you think Zoe will react to her sister doing the opposite of what she demanded? Do you think that’s really the issue or is Zoe really jealous that Zende is moving on with Paris?