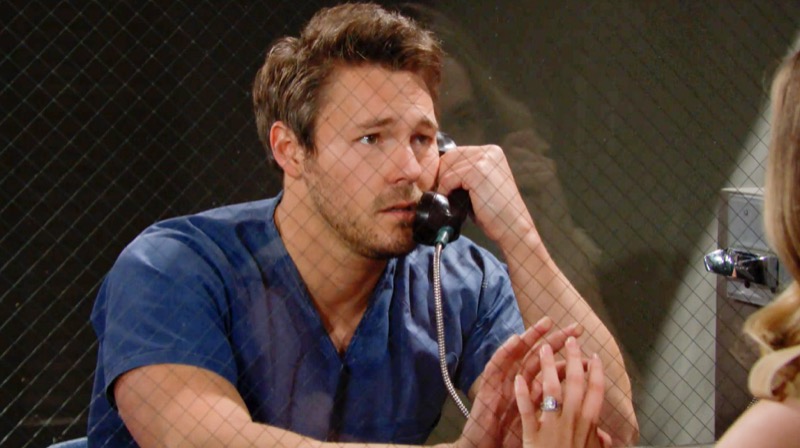 The Bold and the Beautiful spoilers reveal Liam Spencer languishing away in jail while Thomas Forrester languishes away in a cave knowing that it was Vinny who threw himself in the path of Liam’s car that night leading to Vinny’s death.

The Bold And The Beautiful Spoilers – Will Liam Spencer Remain In Jail Long-Term?

Liam’s sad predicament has fans wondering if Scott Clifton is leaving The Bold and the Beautiful after all these years. He can’t very well have a story if Liam is in jail and even if Thomas (Matthew Atkinson) gets Vinny’s video to the cops, it doesn’t take away from the fact that Liam was involved in a hit and run and broke the law. That means he can end up behind bars for a really long time.

That doesn’t necessarily mean Liam and Clifton can’t be seen. Plenty of soap stories have taken place behind bars. At the moment, General Hospital has an entire storyline between two main characters taking place in prison. In fact, it’s the prison story that reintroduced fan favorite Shawn Butler (Sean Blakemore) to the show.

With both Liam and Bill (Don Diamont) behind bars, we can see them bonding more as we saw the other day. For all we know, Bill will even plot a way to break out and drag Liam along since Bill is apt to do things like that. If it wasn’t for Bill leaving Vinny (Joe LoCicero) for dead on the side of the road and covering it up, they wouldn’t even be behind bars in the first place.

B&B Spoilers – What Will Happen While Liam Spencer Remains In Prison?

In the meantime, the story can also focus on Hope (Annika Noelle) and her living her life without Liam, something she really needs to learn how to do. Hope has been all about Liam for so long she’s forgotten how to live for herself. If Steffy (Jacqueline MacInnes Wood) can do it, Hope can do it too.

In the end, we’re sure Liam will be cleared of all charges and return to Hope and her kids, but him being in prison leads to great drama for now — and it can also lead to finding out if Vinny really did kill himself for the love of Thomas. Stay tuned to The Bold and the Beautiful weekdays to see how this story plays out.

90 Day Fiancé Alum Larissa Lima Is On The Move Again