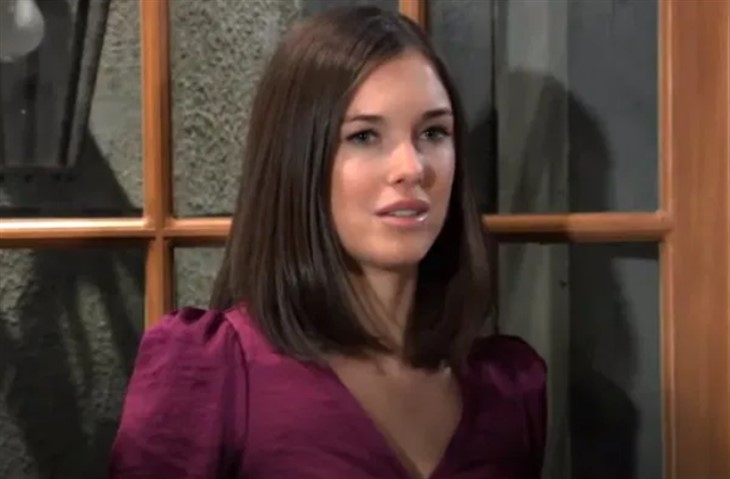 General Hospital (GH) spoilers tease that Willow Tait (Katelyn MacMullen) will confront Dr. Hamilton Finn (Michael Easton) over his “secret” treatment for Harrison Chase (Josh Swickard) in an upcoming episode of General Hospital. Willow, not being in the loop on Chase’s poisoning or Peter August (Wes Ramsey) holding the only antidote, thinks Finn’s treatment is what is causing Chase’s problem!

General Hospital viewers will remember that the only reason that Finn allowed Chase out of General Hospital was that Monica Quartermaine (Leslie Charleson) was there. That way there was a doctor on-site if Chase took a turn for the worse, and Finn likely let Monica in on the situation, and as the former Chief of Staff of General Hospital, she would know not to violate doctor-patient confidentiality laws. However, Willow is a constant visitor of Chase’s, when she is not busy working or caring for Wiley Corinthos (Theodore and Erik Olson).

Viewers will also remember that for Chase’s sake, Michael Corinthos (Chad Duell) and Willow put their own relationship on hold, even though Chase has gotten the wrong idea at times. Michael and Willow didn’t want him to know the truth until he is strong enough to handle it. But with everyone living in the same house, big as it is, Willow cannot help but sometimes see when Finn is there putting a vial of an unknown substance in Chase’s IV line!

It is easy to see how Willow, who is in nursing school, might think that what she thinks is an experimental drug might be giving Chase some adverse side effects; Nurse Elizabeth Baldwin (Rebecca Herbst) thought the same thing and confronted Finn over it while Chase was still in General Hospital! Finn had to explain things to her.

Wiley was in the care of Lucas Jones (Matt Trudeau) and Brad Cooper (Parry Shen) for nearly two years before Lucas, after having been in a serious automobile accident and a head injury which put him in a coma and then gave him amnesia remembered Brad coming clean to him in the car. Willow was devastated when she found out that Wiley was really Michael’s child with Nelle Benson, (Chloe Lanier) and not her child with Shiloh, and that it was her child that died and not Michael’s.

That is one reason that Michael allowed Willow to adopt Wiley and be his adoptive mother even when they weren’t involved romantically and their marriage was in name only. Willow happens to come to spend some time with Chase in his room when Finn is there and sees the vial of the unknown substance that he puts into Chase’s IV line. But this time, something goes wrong – and Chase begins to convulse!

Willow is in exactly the wrong place at the wrong time for Finn, and she blames the unknown substance for making Chase worse not knowing that Chase had previously been receiving an antidote for a toxin! She lays into Finn, and she has to be physically pulled away from the room while Finn gets Chase stabilized and pushes saline to get the “bad batch” out of his system! Obviously, Finn has to explain to Willow what is really wrong with Chase – and then deal with Peter!