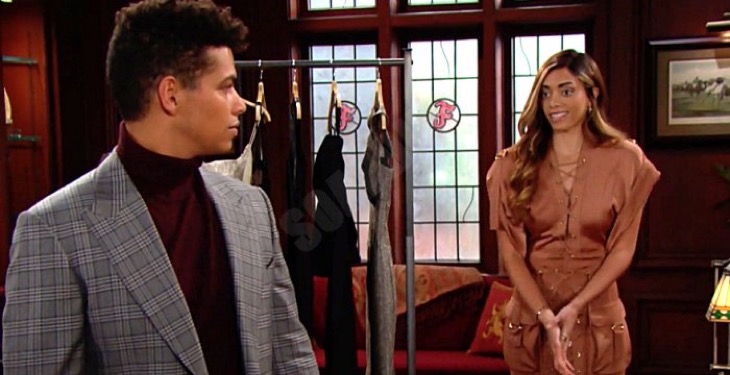 The Bold and the Beautiful (B&B) spoilers reveal that in Los Angeles Ridge Forrester (Thorsten Kaye) noticed the spark between    and Zende Forrester (Delon de Metz). He confronts them, but both lie to his face. Then, Ridge hears Zoe pledging her love to Zende. Imagine their surprise when Ridge crashes through the door and interrupts their private party!

The Bold And The Beautiful Spoilers – Zoe Buckingham’s Bold Statement

B&B spoilers reveal that last week, Zende interrupted Ridge and Steffy Forrester’s (Jacqueline MacInnes Wood) conversation. He was looking for Zoe and it had something to do with a work project. Suddenly, Zoe snuck in behind Zende and made a bold statement that raised red flags with Ridge. She said that she’s always there for Zende, but it wasn’t the words that spark concern. It was the seductive look on her face, her body language and most of all, the voice that Zoe used when making the statement. Steffy was consumed with her own issues, so she wasn’t paying attention. However, alarm bells are going off in Ridge’s head.

Ridge understands that sometimes people will flirt with others with no intention of cheating. He hopes that is all that is going on with Zoe, but he decides to find out for sure. He questions Zoe about her feelings for both Zende and Carter Walton (Lawrence Saint-Victor). However, she claims to not have a clue what Ridge is talking about. He quizzes Zende, but doesn’t get anywhere with him either. Ridge can see through Zende’s facade and knows that he’s lying to his face.

The Bold and the Beautiful spoilers reveal that Ridge will later decide to interrogate Zende again. As he heads off to talk to him, he hears voices inside the office. He lurks outside the door and hears Zoe pledging her eternal love to Zende. Ridge can’t believe what he is hearing, but when he gets the impression that things are about to get physical, he takes action. Suddenly, Zoe and Zende’s private passion party is crashed by Ridge. He literally bursts through the door and exposes his eavesdropping.

It is teased that Ridge isn’t the only person who suspects Zoe isn’t faithful or committed to Carter. Paris Buckingham (Diamond White) decides to fill in Carter on what she’s observed about Zoe. However, it is indicated that Carter doesn’t believe the story he is being told. Even though he abandons the idea of an insta-wedding, Carter stays with Zoe. That will prove to be a mistake because Zoe steps up her seductive scheme, but Carter’s not the recipient. That’s right, Zoe makes some bold advances and it seems that Zende isn’t able to say no. Will Carter ever stop living in denial? Why can’t he see that Zoe is just playing a heartless game with him? We will have to keep watching the CBS soap to see what happens next.

Be’ sure to catch up on everything happening with B&B right now. Come back here often for The Bold and the Beautiful spoilers, news, and updates.