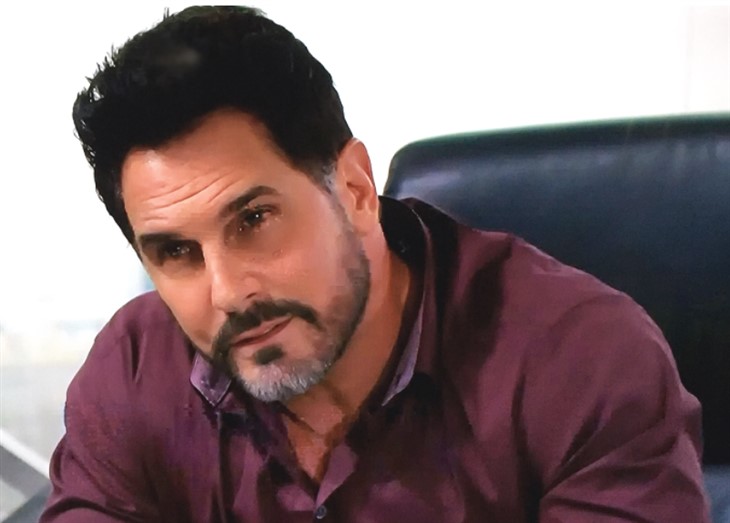 The Bold and the Beautiful (B&B) spoilers tease Bill Spencer (Don Diamont) will soon be back on canvas again to pick things back up with Katie Logan (Heather Tom). As B&B viewers know, Bill appeared recently on the show when Wyatt Spencer (Darin Brooks) brought Y&R’s Summer Newman (Hunter King) to Spencer Publications to meet the publishing mogul.

Bill was shirtless, having just worked out in his office, and he was in rare form, chastising Wyatt for catching him in a moment. It was great to see Dollar Bill back on the show after an absence, and we suspect viewers were happy to see him back, too. Bill has been shown in the office here and there doing business deals and talking with his sons on occasion, but it’s just not enough.

It’s about time that we get Bill back and enmeshed in a real storyline. There are some great opportunities for Bill to pop back in Liam Spencer’s (Scott Clifton) orbit now that Liam’s having problems with Hope Spencer (Annika Noelle). Liam could really use some “dad” advice, although it looks like he’ll primarily get support from Wyatt in the days to come.

The Bold And The Beautiful Spoilers – Good News

The good news here is that Bill will be popping back up on B&B as he continues to try to work things out with Katie. As viewers will remember, Bill messed up royally back when he kissed Brooke Forrester (Katherine Kelly Lang) and the whole thing ended up being recorded then broadcast for all to see on a digital picture frame. Things with Katie have been understandably strained ever since.

Presumably, Bill has been giving Katie space to figure out what she wants and whether she’ll be able to forgive him. Both Bill and Katie would probably like nothing more than to have their family with Will Spencer (Finnegan George) back, but it’s a big ask for Katie, especially since she’s been down the cheating road with Bill before.

B&B spoilers indicate that Bill will soon pick things back up with Katie, urging her to take him back, and it seems that he’ll get quite emotional as he does so. But at this point the big question is whether enough time has passed that Katie can take Bill back…or whether no amount of time will be able to heal the wound.

We’re rooting for Bill and Katie, but one thing’s for sure – if Katie does take Bill back, this will surely be his last and final chance with her. And if Bill does mess up again and pursue Brooke under any circumstance in the future – well, that should be the very end of Bill and Katie!

At any rate, it will be great to see Dollar Bill back in action on the Bold and the Beautiful and having more scenes than we’ve seen in recent weeks. Are you looking forward to seeing Bill try to get Katie back? Stay tuned to B&B and we’ll be sure to keep you updated with all the latest Bold and the Beautiful spoilers, daily episode recaps, and news.