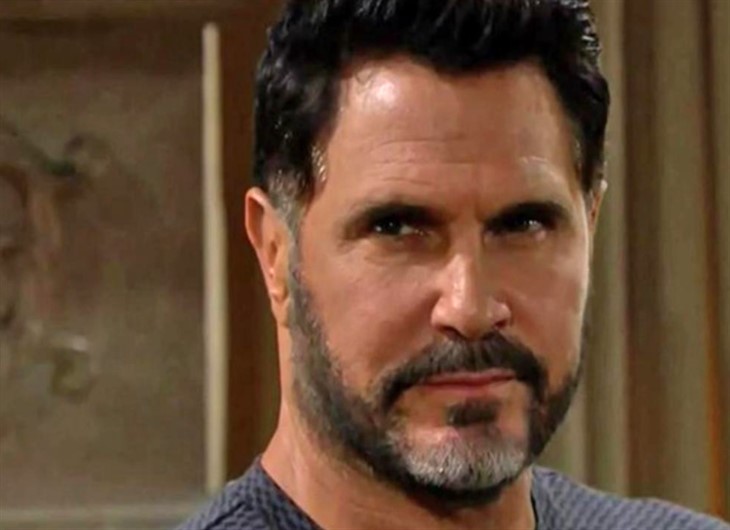 The Bold and the Beautiful (B&B) spoilers for Wednesday, April 28, 2021, reveal Liam nearly losing his mind as the cops try questioning him about the night of Vinny’s murder. What will Bill do to save or help his son?

Liam (Scott Clifton) is still an absolute wreck despite Hope (Annika Noelle) asking him to move back in so they can continue their life together. Hope asked for no more secrets. Liam said sure. At least that’s what he said out loud. In his head, he told himself what’s one more whopper of a secret that involves a car and a dead body? Hope will never find out, right?

Well, when the cops come calling Liam has to wonder if he made a bad calculation, as he frequently does. He does not expect Dollar Bill (Don Diamont) to come swooping in and talk to the police. What will Bill say? He probably has quite the story ready and needs to make sure Liam’s words match what he already told the cops.

Will Liam cave under the pressure and blurt out the whole sordid tale of the night of Vinny’s (Joe LoCicero) death or will he go along with his father’s lies?

The Bold And The Beautiful Spoilers And Recap Tuesday, April 27: Quinn Walks In On Eric and Donna – Hope Forgives Liam #BB #BoldandBeautifulhttps://t.co/pQ7aKLT8Tt

Hope is blissfully happy and thrilled to have Liam back. She even believes he’ll never keep a secret from her again. And now she has two men in her life. Thomas (Matthew Atkinson) seems to be her new BFF so Brooke (Katherine Kelly Lang) gets to take a page out of her script again and repeat herself.

Stay away from Thomas, Brooke warns her daughter. He’s no good. Hope can’t trust him. What if he is faking his new attitude in life? Is he really apologetic or just trying to trick Hope? (Is she talking about Liam or Thomas?) It’s the same song and dance and Hope just listens to it because she’s used to it already. Will she even bother arguing with her mother knowing it likely won’t do any good? Stay tuned to The Bold and the Beautiful weekdays to see if Hope ever wises up about Liam.