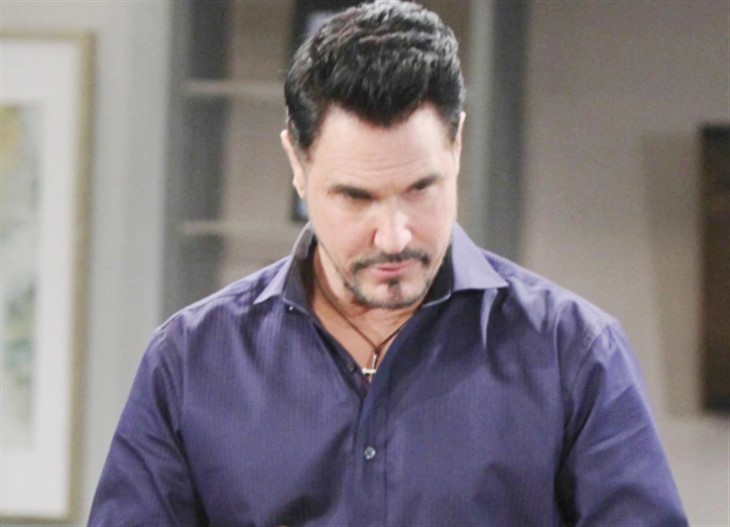 The Bold and the Beautiful (B&B) spoilers show Bill Spencer (Don Diamont) is a man of action. He made a decision that could destroy his family. Bill and his son Liam Spencer (Scott Clifton) were out for a drive. Liam was driving the car and he accidentally hit Vincent Walker (Joe LoCicero).

Liam wanted to get Vinny’s help but he died. The Bold and the Beautiful recaps reveal Liam passed out and Bill decided that they needed to leave the scene. Bill got rid of Vinny’s cell phone and wallet. Liam was very upset that Bill had left Vinny without contacting the authorities. Bill believes that Liam will go to jail if anyone knows that he was the reason that Vinny died on The Bold and the Beautiful.

Bill wants to make sure that Liam does not get into trouble. Liam had a reason to want Vinny dead. Liam had a one-night stand with Steffy Forrester (Jacqueline MacInnes Wood). Steffy found out that she was pregnant soon after the one nightstand. For a time Liam and everyone else thought that the baby that Steffy was carrying was his because of the paternity test results.

However, Steffy’s brother Thomas Forrester (Matthew Atkinson) found out that the test was altered by Vinny and that Dr. John Finnegan (Tanner Novlan) was really the father of Steffy’s baby. Liam was saddened but relieved to find out that he was not the father.

According to B&B spoilers and recaps, Liam has been trying to get his marriage with Hope Spencer (Annika Noelle) back on track since his one-night stand with Steffy. Bill knows that Liam wants to get Hope back. He does not want Liam to jeopardize his chance to be with Hope because of the accident.

Bill has another son Wyatt Spencer (Darin Brooks). Currently, Wyatt has gotten engaged to his childhood sweetheart Flo Logan (Katrina Bowden). It has taken them many years to get to the place that they are in. Wyatt and Flo went their separate ways but were reunited. Flo found out that she was a part of the Logan family. She is the daughter of Storm Logan (William deVry) and Shauna Fulton (Denise Richards).

It took a while for Flo to be accepted by the Logan family on The Bold and the Beautiful. Wyatt supported Flo with her efforts to become a Logan. Bill wants Wyatt and Flo to have a good future. He is concerned that the situation with Liam and Vinny could cause trouble for Wyatt and Flo.

Bill has been in an on-again and off-again relationship with Katie Logan (Heather Tom). They have a son Will Spencer (Finnegan George) together. Will wants his parents back together. He tried to get them back together before. Bill wants to be able to be with Katie and Will again. However, Bill knows that the situation with Vinny could cause problems for him in regards to Katie and Will.

The Bold And The Beautiful Spoilers And Recap Monday, April 26: Hope Pressures Liam For Truth, Zoe Gets Bad Newshttps://t.co/NBETSQiX21