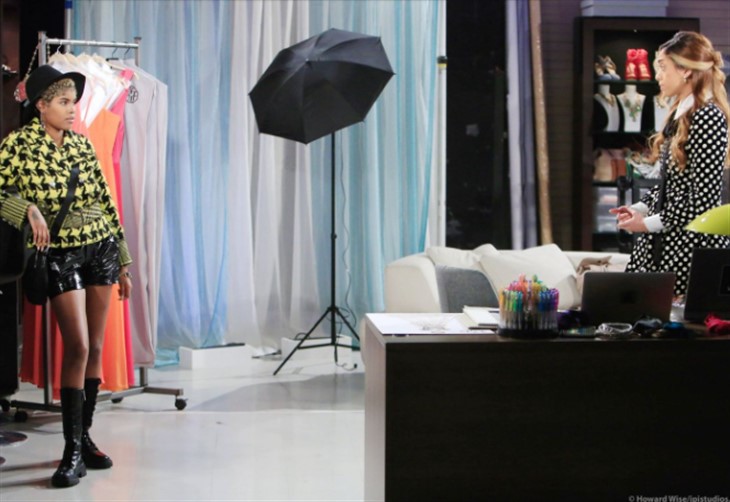 The Bold and the Beautiful (B&B) spoilers for Wednesday, April 29, 2021, reveal sisters teaming up at last and Wyatt wondering what is going on with the other men in his family.

When Paris (Diamond White) first arrived in Los Angeles, Zoe (Kiara Barnes) wanted her out of town and fast. In fact, she ordered to leave town but Paris is her own woman and can live where she wants. After all, Paris liked Zende. And Zoe liked Zende (Delon De Metz). Never mind that Zoe was already engaged to Carter (Lawrence Saint-Victor).

Now, Zoe and Zende are dating and Carter has broken things off with Zoe, and Zoe still had to sabotage her sister by spiking her drink with something that gave her stomach cramps on her first date with Zende.

But forgiveness is in order and the sister makes up on Thursday. Then, they set about trying to get Carter to forgive Zoe and take her back. Might Carter be looking at someone else now? Or was that someone else — Quinn (Rena Sofer) — looking at Carter.

While Liam (Scott Clifton) and Bill (Don Diamont) have been trying to figure out how to make the cops believe they had nothing to do with Vinny’s (Joe LoCicero) death, the third Spencer man, Wyatt (Darin Brooks) has been surprisingly absent from these Liam panic attack sessions.

That begins to change on Thursday when Wyatt pays a visit to his dad and notices he is acting stranger than usual. He knows something is up and demands to know what’s going on. Will Bill decide to unburden his conscience and let Wyatt in on the secret? Or will he realize telling Wyatt and ordering him to stay quiet put his other son in legal trouble, too?

Bill has got to realize that Wyatt will either turn them in or become an accessory. If he stays quiet, will Wyatt then go to Liam to get to the bottom of things? Liam probably has a bigger mouth than Bill and will let it all pour out. Stay tuned to The Bold and the Beautiful weekdays to see how this all plays out.