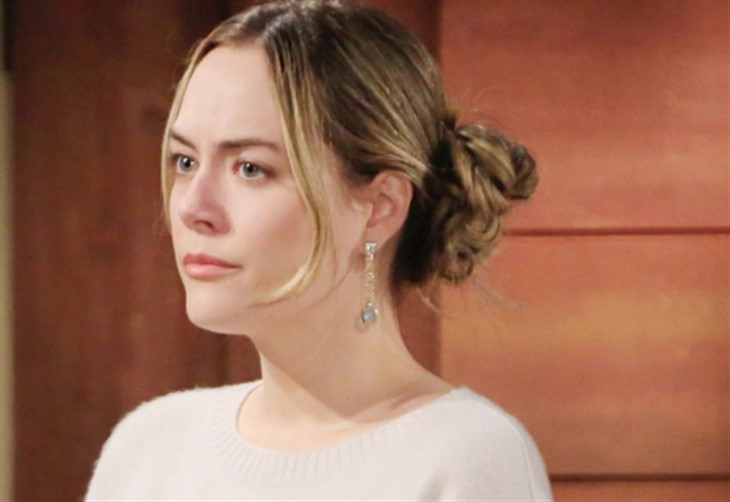 The Bold and the Beautiful (B&B) spoilers reveal that in Los Angeles Hope Logan will lean on Thomas Forrester (Matthew Atkinson). While fans are predicting “Thrope” will replace “Lope,” actress Annika Noelle seems to indicate it’s just a very close friendship that is building. Keep reading to find out what she had to say about Thomas and Hope’s heartfelt chat and what it means.

The Bold And The Beautiful Spoilers – From ‘Lope’ To ‘Thrope’?

B&B spoilers reveal that many fans are predicting that Liam Spencer (Scott Clifton) will lose Hope and she could end up getting together with Thomas. While the clues do seem to be leading to this conclusion, Noelle has hinted that it’s “not like that.” So, what exactly is going on between Thomas and Hope? If not a future romance, then what exactly is their relationship status because they aren’t like they were before.

We previously predicted that Liam could get a helping hand from his number one enemy. It turns out that actually will happen. In the new issue of Soap Opera Digest, Noelle confirmed that Hope is furious with both Liam and Steffy Forrester (Jacqueline MacInnes Wood). However, Thomas reminds her how much she loves him and also that Liam’s whole heart belongs to Hope and their family. It’s definitely odd since not too long ago Thomas was obsessed with her. Even after he healed from that, he still disliked Liam and how he treated Hope and Steffy like yo-yo’s, always going back and forth.

The Bold And The Beautiful Spoilers – Hope Logan’s Solid Friendship

The Bold and the Beautiful spoilers reveal that Noelle told the magazine that there is a very solid friendship developing between Thomas and Hope.

“Thomas actually says, ‘I have first-hand witnessed just how much Liam means to you.’ I think the audience might be surprised by the kind of advice he gives Hope in this scenario. It’s a really nice moment between them, and it’s actually developing into a very solid friendship.”

While fans will be shocked that this is just a friendship building storyline, not a romantic one, Noelle thinks it’s totally normal. She says that Thomas and Hope grew up together and were always good friends. At least until he went off the rails, but now that he’s better, they can get back that friendship. It might even be stronger than before because of everything they’ve gone through together. However, with the way Liam feels about Thomas, will he “allow” Thomas and Hope to be friends? Or will it make the issues between “Lope” even worse? We will have to keep watching the CBS soap to see how this storyline develops over the next few weeks.