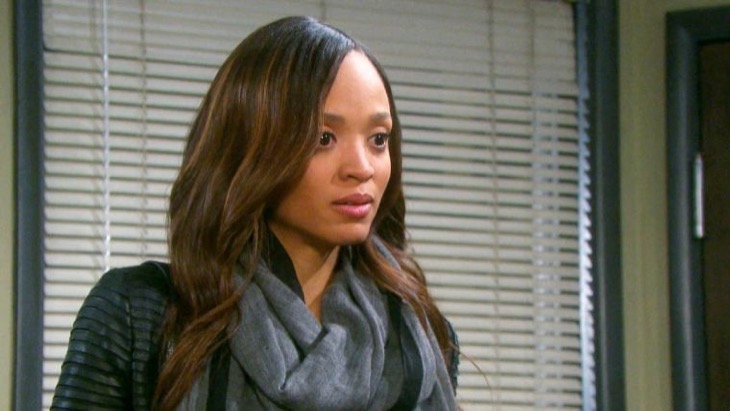 Days of Our Lives spoilers reveal that in Salem Bonnie Lockhart (Judi Evans) gave the police a description of the woman she saw with twin babies. At first, she sketched Dr. Valerie Grant (Vanessa Wiliams), but then gave the proper description of the kidnapped. Lani Price Grant (Sal Stowers) will be angry and confused, but Dr. Amanda Raynor (Victoria Platt) has a story to tell.

DOOL spoilers reveal that Bonnie had a difficult time giving the police sketch artist an accurate description of the kidnapper. However, she doesn’t work well under pressure, especially when people are crowding her. It should have just been Bonnie and the sketch artist. Instead, there was Bonnie, the artist, Lani, Eli Grant (Lamon Archey), and Valerie. There were times when Justin Kiriakis (Wally Kurth) and Abe Carver (James Reynolds) were also part of the scene. That is way too many people in one tiny room and can easily cause a witness to become pressured and overwhelmed.

Eventually, Bonnie gave the right description, but it left Lani and Valerie in shock.

The sketch showed that the woman Bonnie saw with the twin babies was Amanda Raynor. She used to be a colleague of Valerie’s and Lani saw her during her pregnancy with David Grant. Speaking to Soap Opera Digest, Stowers explained that when she sees the sketch of Dr. Raynor, she is more confused than angry at that moment.

“At first, she’s very shocked because Dr. Raynor was so nice to her when she was pregnant with David Abraham, so she didn’t see this coming at all. What did Lani ever do to Raynor? What is her motive behind taking the babies?”

Days of Our Lives spoilers reveal that fans know Dr. Raynor was also blackmailed by Victor Kiriakis (John Aniston) and Xander Kiriakis (Paul Telfer). She was paid to keep quiet about switching the babies of Sarah Horton (Linsey Godfrey) and Kristen DiMera (Stacy Haiduk). Nicole Walker Brady (Arianne Zucker) found out the truth and hunted Dr. Raynor down. However, after hearing her story and was in fear of her life, Nicole agreed to keep her name out of the big baby swap reveal.

Rafe Hernandez (Galen Gering) does question Xander about it, and he finds out about his connection to Dr. Raynor from Nicole. After all, the two are getting quite close and of course, Nicole will want the kidnapped babies to be found. However, Xander isn’t involved this time. Now, Dr. Raynor has gotten mixed up with an evil worse villain: Vivian Alamain (Linda Dano).

Dr. Raynor told Nicole she did what Victor and Xander said because she needed the money. Then, she said she was threatened and in fear of her life, which is why she fled Salem. She did look pretty desperate and convincing. So, why get involved in another baby scheme? Well, she could have been on Vivian’s payroll all this time. Another possibility is Dr. Raynor is desperate for money and will do anything to get herself out of debt.

One other reason could be more emotional in nature. Maybe Vivian and Ivan Marais (Ivan G’Vera) are holding something over Dr. Raynor’s head. It would have to be something that would have more harsh consequences than kidnapping newborns of two cops. The only thing we can think of is murder. But since this is a soap, it would have to be a story that would tug at the heartstrings. So, are we about to see an “explanation” for her devious deeds? We will find out soon enough.