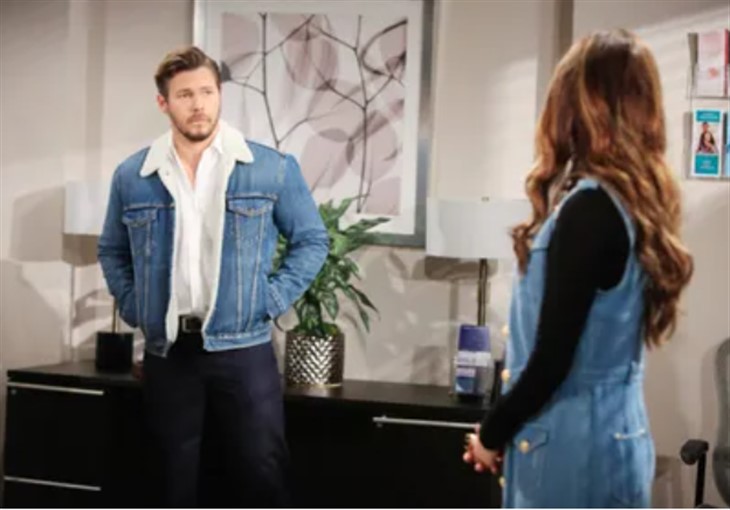 The Bold and the Beautiful (B&B) spoilers reveal that Steffy Forrester (Jacqueline MacInnes Wood) returns. She probably has heard about Vinny Walker’s (Joe LoCicero) death but will be stunned when Liam Spencer (Scott Clifton) is arrested. She actually could have evidence that identifies Vinny’s real killer. It would save Liam from prison and close a plot hole from an old storyline.

The Bold And The Beautiful Spoilers – Liam Spencer Arrested

B&B spoilers reveal that Liam is arrested for murder. Bill Spencer (Don Diamont) takes another extreme measure to keep his son out of prison. Bill will try to take the blame for the hit-and-run, as well as the cover-up. However, Liam won’t allow his father to go to prison when he wasn’t even behind the wheel. He also knows that the only way to resolve his guilty conscience is to take responsibility and accept the consequences.

The two will go back and forth repeatedly. Bill will claim he needs to be charged while Liam insists he is the one who actually killed Vinny. Not able to get a clear answer on who is actually guilty of murder, the detectives will get frustrated.

With Steffy coming back on-screen right after Liam confesses to Hope Logan Spencer (Annika Noelle), she will likely be part of this storyline. She knows that Liam isn’t a killer and has some information about Vinny that will take the investigation in a whole new direction. It will also resolve a plot hole from Steffy’s addiction storyline.

The Bold And The Beautiful Spoilers – Vinny LoCicero’s Drug Delivery

The Bold and the Beautiful spoilers reveal that nobody knows that Vinny delivered pain pills to Steffy. She didn’t ask Vinny for any pills. In fact, Thomas Forrester (Matthew Atkinson) confided in Vinny about Steffy’s pain. Vinny was a drug dealer and took advantage of the situation. He actually was bold enough to give the present to Thomas so he could hand-deliver it to Steffy. It was a bottle containing pain pills with a note from Vinny.

She fired off an irritated text. But he encouraged her to take the pills and it would be their secret. Thomas is clueless that his best friend used him as a drug mule and fueled Steffy’s addiction. In fact, it could have killed her. As far as we know, Steffy hasn’t told anyone about Vinny and she might still have the bottle. It might be an empty bottle, but it would have fingerprints.

There is a good chance that the person who killed Vinny might have also been his drug supplier. It’s possible that the individual might even have touched that particular bottle and it might still be somewhere in Steffy’s house. Most drug dealers have dealt with the police at least once. Even if there was no conviction, the fingerprints could be in the system.

The Bold And The Beautiful Spoilers: Thomas Forrester’s Forgiveness

The Bold And The Beautiful Spoilers: Shauna’s Love Triangle, Torn As Eric And Ridge Both Suddenly Singlehttps://t.co/Z4xEqxWNod

Thomas keeps saying that Vinny was a good person and didn’t deserve to die. He even brought up that Vinny volunteered at the animal shelter. It was a strange statement as drug dealers usually don’t do volunteer work. Even though Thomas will always miss his best friend, finding out about Steffy’s “gift” could change things. For one, Thomas will realize that his BFF wasn’t a good guy and risked Steffy’s life just to make a few bucks. It might also extinguish Thomas’s vow of vengeance. Most likely, Liam struck Vinny with the car but didn’t cause his death. It was already too late by the time Liam hit him.

It would also set the stage for Thomas to forgive Bill and Liam for the cover-up. It was hinted a few months ago that Thomas and Liam’s relationship will have some surprising changes. What could be more unexpected than forgiveness and perhaps even friendship?