The Bold And The Beautiful (B&B) Spoilers: How Can Steffy And Finn Help Thomas And Hope? 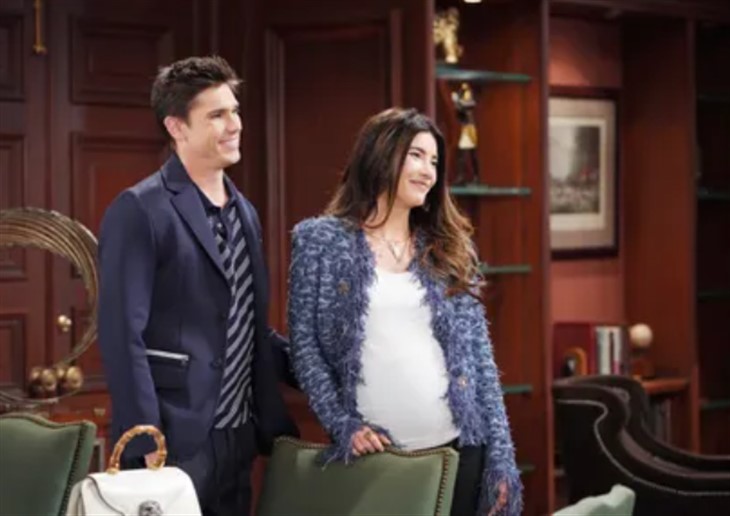 The Bold and the Beautiful (B&B) spoilers and updates tease Steffy Forrester (Jacqueline MacInnes Wood) and Dr. John Finnegan (Tanner Novlan) are expecting a baby. Recently they found out that they were going to have a boy. Steffy was happy to find out that she was going to have a son because she has a daughter Kelly Spencer (Collette and Avalon Gray). However, Steffy and Finn were not happy about the situation surrounding Steffy’s pregnancy at first. Steffy had a one-night stand with Liam Spencer (Scott Clifton). She needed to have a paternity test to find out who was the father of her baby. The test revealed that Liam was the father of her baby which saddened Steffy because she wanted Finn to be her baby’s father.

Later Thomas Forrester (Matthew Atkinson) found out that his friend Vincent Walker (Joe LoCicero) had altered the paternity test. Vinny had wanted to give Thomas a chance to be with Hope Spencer (Annika Noelle) who is married to Liam because he knew that Thomas cared for Hope. Thomas told everyone the truth. Finn and Steffy got engaged. Hope and Liam began to put their marriage back together. However, tragedy struck when Liam accidentally killed Vinny. Liam and his father Bill Spencer (Don Diamont) were out for a drive when Liam accidentally hit Vinny with the car. Bill tried to cover the accident up but Liam felt guilty for killing Vinny. Liam confessed to Hope and decided to tell the police the truth.

Hope is devastated to find out that Liam accidentally killed Vinny. She does not know what might happen with him now that he has confessed to Deputy Chief Bradley Baker (Dan Martin) that he killed Vinny. Steffy and Finn can help Hope with her children. Hope is the mother to Beth Spencer (River Davison) and Douglas Forrester (Henry Joseph Saimiri) Steffy knows that Hope loves her children especially Beth. Steffy loves Beth because she had been her adopted mother. Steffy had adopted Beth without knowing that she was Hope and Liam’s daughter. Steffy returned Beth to Hope and Liam when she found out the truth. Steffy can help Hope to take care of Beth and Douglas.

Steffy loves Thomas because he is her brother. She knows that Vinny was important to him. Thomas and Vinny had been friends since they were children. Steffy can help Thomas with his grief over losing Vinny. Thomas will be upset to find out that Liam accidently killed Vinny. Thomas has wanted the person who killed Vinny to be brought to justice. Steffy can help Thomas deal with knowing that Liam accidently killed Vinny. She can help him with his son Douglas who he co-parents with Hope. Finn is going to become Thomas’ brother in law. Finn can help Thomas by becoming his friend.

The Bold And The Beautiful (B&B) Spoilers: Quinn And Carter Can’t Escape the Guilt