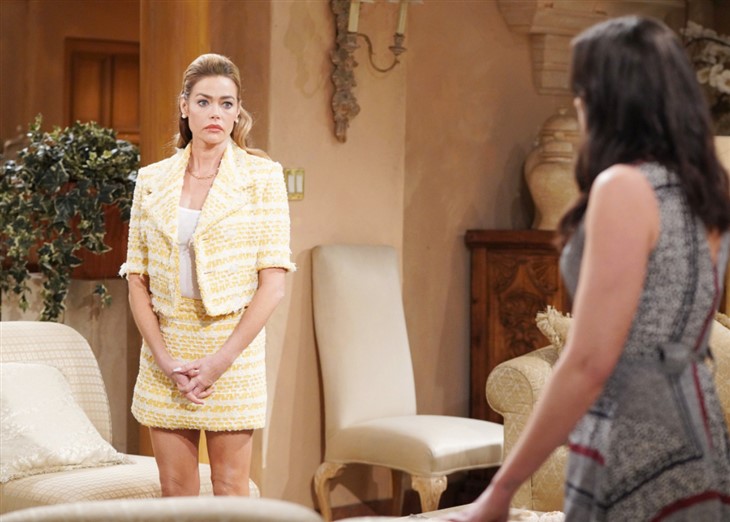 The Bold and the Beautiful (B&B) spoilers reveal that Shauna Fulton (Denise Richards) makes a huge sacrifice for Quinn Forrester (Rena Sofer). To protect her BFF, Shauna probably pretends to be Carter Walton’s (Lawrence Saint-Victor) new woman. In a sneak peek photo, Zoe Buckingham (Kiara Barnes) goes to Shauna with a passionate plea. Will she beg Shauna to dump Carter?

The Bold And The Beautiful Spoilers – Saving Quinn Forrester

B&B spoilers reveal that Quinn has gotten herself into one big mess. Carter will also have to answer hard questions and face the Forrester family if the truth comes out. For Quinn, Eric Forrester (John McCook) confronted her about what she said about not letting one night ruin her marriage. Shauna managed to cover for her and it seems that she will once again take action to protect Quinn.

It is teased that Shauna will make a big sacrifice for Quinn. More people will start asking questions, especially Zoe, Eric, Brooke Logan Forrester (Katherine Kelly Lang), and even Zende Forrester (Delon de Metz). Carter is going to have to tell them something, especially when Zoe’s surprise ends up with her getting the shock of her life. So, Carter needs to admit he’s seeing someone but he can’t say it’s Quinn. This is where Shauna’s big sacrifice comes into play.

The Bold And The Beautiful Spoilers – Zoe Buckingham’s Investigation

The Bold and the Beautiful spoilers reveal that Zoe will demand that Carter tell her who he is seeing now. However, it’s really none of her business. Carter and Zoe have been over for a while now. It certainly isn’t Carter’s fault that Zoe has become obsessed with him after nearly throwing him away for a night with Zende. But that won’t stop Zoe from trying to figure it out. She wants answers and won’t stop until she gets them.

The Bold And The Beautiful Spoilers: Thomas Accuses Bill Of Murder, Wyatt Walks In On Volatile Situationhttps://t.co/MXTc3Xx2iw

In the new issue of Soap Opera Digest, Zoe is seen making a passionate plea to Shauna. The Vegas vixen is just looking at Zoe. Shauna isn’t moved by Zoe’s speech and seems rather bored or even disturbed by the way Zoe is acting. We can see Zoe share her “love story” with Shauna. She might even beg Shauna to break up with Carter.

However, what will the model do when Shauna refuses to end her phony romance with Carter? Just how much will Shauna end up sacrificing because of Quinn’s betrayal? Zoe is already borderline crazy and there is no predicting how she will handle being heartbroken and replaced. We will have to keep watching the CBS soap to find out how this story ends.