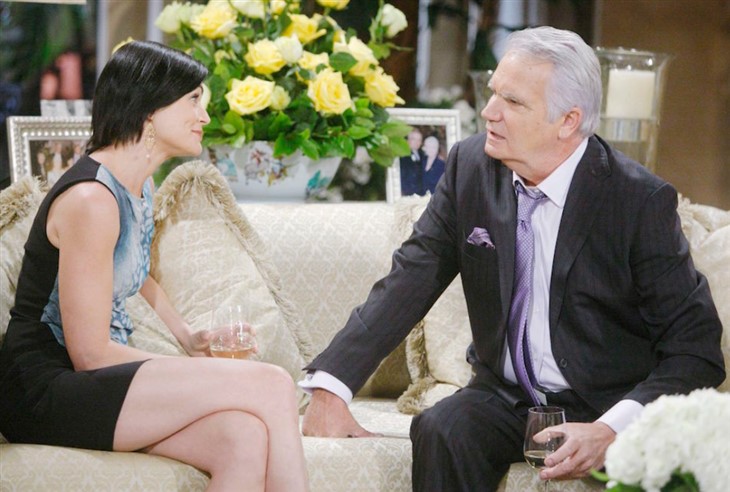 The Bold and the Beautiful (B&B) spoilers document that Quinn Fuller Forrester (Rena Sofer) may be the one to end her marriage, making Eric Forrester’s (John McCook) renewed doubt a foreshadowing instead of the driver. As B&B implied, Quinn may have just started what could become a pursuit of Carter Walton (Lawrence Saint-Victor).

The unexpected development began when Quinn was written into a scene that involved Zoe Buckingham (Kiara Barnes). It and resulted in Sofer’s character encouraging Barnes’ alter ego to play a childish prank on Paris Buckingham (Diamond White).

While it’s natural to expect colleagues would cross paths at Forrester Creations, Quinn’s purposeful intrusion into Zoe’s sibling rivalry felt like a pushed plot point. Time will tell if it was intended to lead to something devastating.

Soaps need to keep plots fresh, which means taking risks. Having Quinn stir trouble is a well-worn path that seemed to have been recently addressed by Eric’s needed, forceful actions that he took in response to his wife’s relentless lurches into other people’s private lives.

Quinn knew that she was in danger of losing Queric when Eric kicked her out of the mansion. That was eventually followed by the personal pitches of Wyatt Spencer (Darin Brooks) and Shauna Fulton (Denise Richards), which helped convince Eric to take Quinn back.

While Eric reconciled with his wife in recent months, Ridge Forrester (Thorsten Kaye) and the fans have come to see that McCook’s character hasn’t been able to resolve all doubt.

If Quinn makes a play for Carter, then he needs to do as Zende Forrester Dominguez (Delon de Metz) did with Zoe and just say no. If he doesn’t more than Queric could come to a sudden end. Carter’s FC reputation would be badly damaged and his career at the fashion house would be in jeopardy of ending.

As viewers recall, Ridge offered Carter a promotion to Chief Operating Officer and a seat on the Board of Directors last summer. Carter was surprised and honored to accept the new level of responsibility, which affirmed the family insider’s high degree of esteem.

Quinn has a unique charm, as Eric knows. Carter is vulnerable and could allow himself to make a terrible mistake with the wife of his top boss.

Bold And The Beautiful Spoilers – Zoe Buckingham Is Volatile

Zoe thinks she just found a new friend and ally in Quinn. But Quinn’s arrival at Carter’s apartment and discussion with him about the distance in her relationship with Eric was noteworthy.

Just as Eric has begun expressing his ongoing doubts about Quinn, she reveals her awareness of her husband’s chilliness. That is ominous in daytime.

The Bold And The Beautiful Spoilers: Carter Betrays The Forresters With His Affair With Quinn #BB #boldandbeautifulhttps://t.co/nzqRMFL8bS

The jealously Zoe displayed toward Paris where Zende was concerned winks at how Barnes’ character would respond if she senses Quinn is a threat where Carter is concerned. No confirmation would be needed to spark a momentous conflict, with the type of deep drama that B&B seems to be aiming for.

The Young And The Restless (Y&R) Spoilers: Victoria Explodes At Victor For ‘Betrayal’, Nikki’s Mediation Backfires