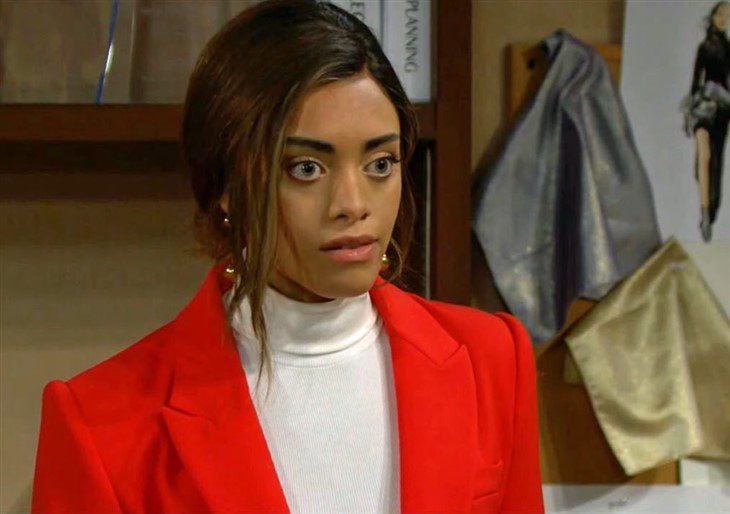 The Bold and the Beautiful spoilers document that Zoe Buckingham (Kiara Barnes) was distraught, but now she’s not. While her initial attempt to remain engaged to Carter Walton (Lawrence Saint-Victor) failed, Zoe has decided to not give up.

Carter was outraged that Zoe was basically two-timing him. He refused to accept her excuses about the behavior she exhibited toward Zende Forrester Dominguez (Delon de Metz) and called off their arguably pushed nuptial plans.

Zoe wronged Carter, but she was right to believe that Zarter was rushing toward the altar. While Carter’s feelings for Zoe were sincere, he would have to admit that his own insecurities propelled him into thinking Barnes’ character was Miss Right.

Carter did tell Zoe that his past romantic experiences left him believing that marriage wasn’t in the cards. He was committed to his profession and living a carefree personal life.

Zoe’s humiliating attempt to marry Thomas Forrester (Matthew Atkinson) impacted Carter directly, as he was the scheduled officiant. That specific day can be cited as the genesis of Zarter.

Quinn’s write-in to Zoe’s storyline is intriguing, as it implies a full-throated attempt will be made to revive Zarter. The couple did have chemistry and if not for Zende’s arrival, clearly projected as one of B&B’s next couples.

Also of note, Zoe’s likability factor is being tested. She seemed to have moved past her initially creepy pursuit of Xander Avant (Adain Bradley) and the misguided desire to keep Beth Spencer’s (Madeline Valdez and River Davidson) existence a secret due to her father’s pressure. So, this rehabilitation attempt could be a tough sell, following the potential third strike that was thrown to Carter.

The Bold And The Beautiful (B&B) Spoilers: Murder Mystery Coming, Which Character Will Be Killed Off? https://t.co/oOKftxbepz pic.twitter.com/huYZXlO4sd

The Bold And The Beautiful Spoilers – Carter Walton Eventually Reconsiders?

Carter surely had every right to feel hurt. Zoe decided to use him as a fallback option after becoming smitten with Zende, who never committed to her.

Zoe is highly appealing and unpredictable. She’s like no one Carter has ever known before. So, this could prove to be a break up period, rather than what seemed to be like the end.

CDL is a leading source for everything linked to The Bold and the Beautiful. Check Soap Opera Spy regularly for B&B spoilers and news!