Days Of Our Lives (DOOL) Spoilers: Do You Like Bonnie And Justin Together? Vote Now! 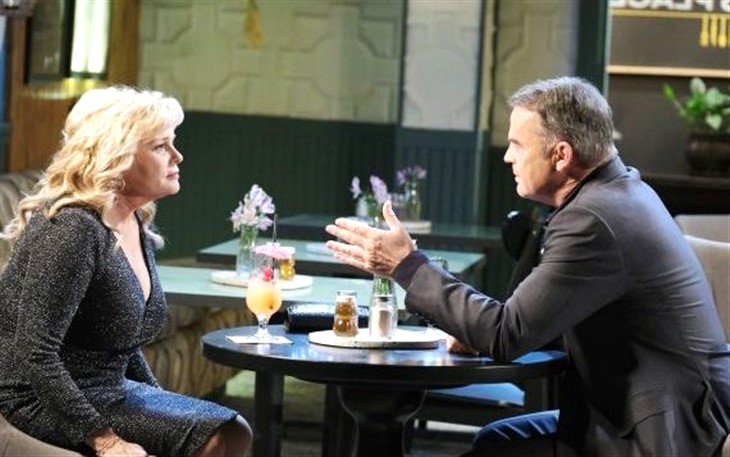 Days of Our Lives (DOOL) spoilers reveal Justin (Wally Kurth) and Bonnie (Judi Evans) planning a wedding, which would be the second wedding Justin has planned since the Salem time jump when we learned Adrienne had died while DAYS was defying the laws of physics.

If we can forget the fact that Bonnie Lockhart is the spitting image of Adrienne Kiriakis, then are we also to forget the fact that Bonnie has taken advantage of that fact numerous times to impersonate Adrienne and even made sure she took her place in prison for a while. Justin was never a fan of Bonnie when Adrienne was alive so it seems weird he’d be such a fan of her now that he’d want to marry her.

With Justin and Adrienne being a couple since the 1980s and a popular one at that, every time some people see Justin and Bonnie together it’s hard to forget she is not Adrienne, so is there a possibility that deep down inside Justin wants to believe he’s with Adrienne and not her doppelganger. After all, he lost her in a sudden and tragic way and it’s easy to want what you lost.

There may be others who just want to give Bonnie a chance because she is not the same woman she was just a few years ago. Characters change. A former serial killer is now a hero and Bonnie is far from a serial killer, no matter how many manipulative things she has done over the years.

In fact, Bonnie is quite the opposite of Adrienne and perhaps Justin is attracted to a brand-new woman who just looks like his late wife but decidedly isn’t. Justin needs someone to love and care for him without thinking of her ex like Kayla (Mary Beth Evans) did and Bonnie fits the bill. She has no preconceived notions so perhaps Justin doesn’t either. Maybe this is a new and refreshing couple to enjoy if you and Justin can just keep Adrienne off the brain. Do you enjoy these two characters together or is it just too odd? Let us know in the Days of Our Lives poll below.

The Young And The Restless (Y&R) Spoilers: The Moment Of Truth For Jack And Sally