The Bold and the BeautifulSpoilers 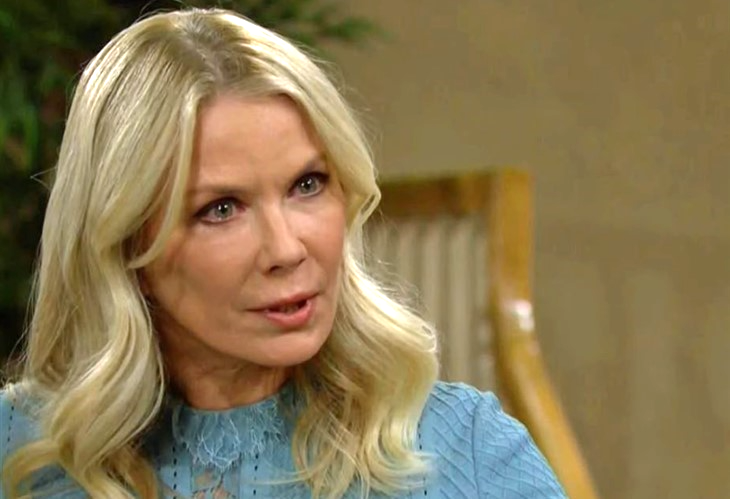 The Bold and the Beautiful (B&B) spoilers document that in Los Angeles Brooke Logan Forrester (Katherine Kelly Lang) was flabbergasted when realizing the her husband didn’t put one and one together. Ridge Forrester (Thorsten Kaye) couldn’t deduce that Carter Walton (Lawrence Saint-Victor) is all-in for Quinn Fuller (Rena Sofer), which is why he fought for the jewelry line to be preserved.

Brooke also suspects that Carter and Quinn are still a couple. The dress on Carter’s sofa, which appeared in the background of the video call he had with Eric, was a glaring red sign. Ridge and Eric are near-sighted where their longtime friend is concerned, with Brooke having perfect vision and common sense.

Eric decided to trust Carter after his chief legal counsel and newest Board of Directors member became involved with Quinn? That is a stretch of the suspension of disbelief technique that is used in fictional story-telling, with soap operas employing it rather often.

However, it can be said that Eric’s legendary forgiving nature allowed Quinn to survive for years after betraying her husband’s trust on numerous occasions. Yet, none of those instances were as bad as this one.

So, the fans are being asked to believe that Eric has concluded Carter was gullible and vulnerable like he was during the now ended Queric half-decade. Okay, but the writing staff must be gearing up for the second soapy shoe drop.

The first Quarter reveal happened at the vow renewal ceremony. Quinn was unceremoniously thrown out on her ear. Eric is now pressing hard for divorce proceedings. That is believable.

However, deciding that Carter should represent him is a mistake and another stretch of believability. But Eric did condition that effort as part of Carter’s second chance effort. Okay again, but repercussions from Quarter’s ongoing connections have to be coming, right?

Carter and Quinn are being more discrete as they have chosen to remain involved. But Brooke is on this. That alone could create the second reveal, unless Quinn decides to stop hiding.

Quinn has nothing to lose and now, thanks to Carter, appears to have retained a very lucrative money-making source. This projects to Quinn reaching a point where she could feel empowered to tell Eric off.

Yes, Quinn could be the one to openly tell Eric that she and Carter are together and will remain so. Her reckless history makes this scenario plausible, while also considering that Carter’s future at FC, that Quinn claims to want to protect, would certainly be over if Eric has a second Quarter dropped on his head.

Days Of Our Lives Comings and Goings: Marla Gibbs Joins The Cast And A Backstreet Boy Debuts