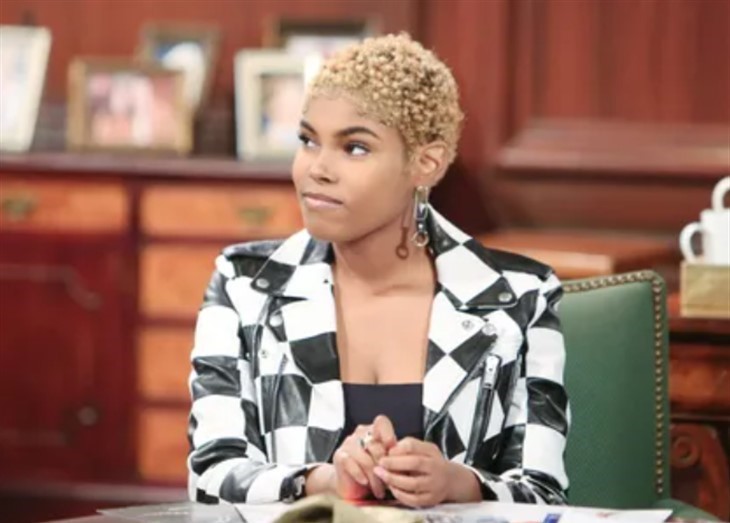 The Bold and the Beautiful (B&B) spoilers reveal that in Los Angeles Carter Walton (Lawrence Saint-Victor) makes his final decision. Afterward, Zoe Buckingham (Kiara Barnes) goes to blame Paris Buckingham (Diamond White) for ruining her life. It is suggested that Zoe could do more than just yell at her sister. She’s never handled rejection well and Zoe just might end up going berserk.

The Bold And The Beautiful Spoilers – Begging For Another Chance

B&B spoilers reveal that Carter was done with Zoe after Ridge Forrester (Thorsten Kaye) shared what he saw. Zoe denied it at first and then she admitted it, but tried to justify her betrayal. Since then, she has been begging nonstop. Carter’s feelings haven’t gone away. Despite being heartbroken, he still loves her and is trying to make the right decision. This is why he asked Paris if he should believe Zoe loves him. The Forrester Foundation newcomer admitted that her sister does love Carter, but she wouldn’t go further than that.

Paris mentioned once to Zoe that she was doing what she’s always done with men. That indicates this is a long-term problem and Carter’s not the only one Zoe has betrayed.

During the week of March 8, Carter will announce his final decision about Zoe. It appears that he kicks her to the curb and never wants to see her again. We have to say that it’s the right choice. If Carter’s name didn’t stop Zoe from trying to bed Zende Forrester (Delon de Metz), then that shows how little she cared about him. Actions speak louder than words and Zoe has spoken loud and clear. The big clue that Carter ends the relationship is what happens the very next day.

The Bold And The Beautiful Spoilers – Attacking Paris Buckingham

The Bold and the Beautiful spoilers reveal that after Carter makes his final decision, Zoe pays her little sister a visit. She lashes out at Paris and blames her for everything being destroyed. As usual, the model refuses to take responsibility. It’s always someone else’s fault and somehow, Paris forced Zoe to seduce Zende even though she wasn’t even there. It is suggested that Zoe will go off the rails and she could do more than just yell at Paris. We think the model is spiraling downhill and she hasn’t hit rock bottom yet.

The actress teased to SoapCentral that we are going to see Paris in a lot more sticky situations before she gets some help. Barnes also mentioned that Zoe has a lot of trauma, including her wedding to Thomas Forrester (Matthew Atkinson) being a hoax. She was humiliated in front of everyone. While that doesn’t excuse what she did to Carter, it does imply that she’s not in a good mental state. The actress even said that everything that’s happened to Zoe the past few years has taken its toll.

If she is having some sort of mental health crisis, she hasn’t gotten close to hitting rock bottom yet. This means there is more drama and unbelievable antics coming up. We expect Zoe will go completely berserk. If it doesn’t happen after Carter dumps her, it will happen sometime in the near future. Let’s hope that nobody gets hurt when she finally loses control and snaps.