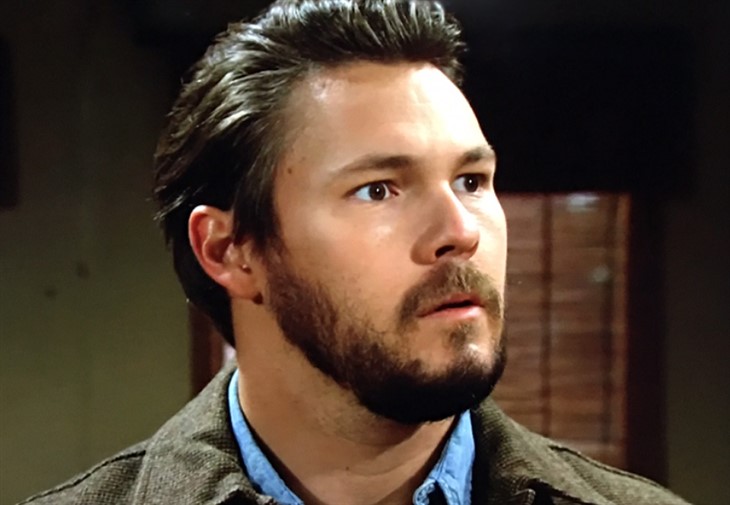 The Bold and the Beautiful (B&B) spoilers reveal that Liam Spencer (Scott Clifton) can’t take the guilt anymore. During the week of April 19, Liam takes drastic action and Bill Spencer (Don Diamont) tries to stop him. What else could it be except Liam confessing to driving the car that hit Vinny Walker (Joe LoCicero)? Keep reading to find out what to expect.

The Bold And The Beautiful Spoilers – Liam Spencer’s Guilt

B&B spoilers reveal that Liam can’t ignore or get past the guilt he feels. It appears that Liam struck Vinny while driving Bill’s car. Whether Liam killed Vinny or if he was already dying from another cause remains to be seen. Whatever the truth is, Liam can’t move past the guilt and it’s just getting worse. He’s gone from passing out and hyperventilation to hearing voices and seeing Vinny appear.

In addition to the stress Bill is putting him under and the overwhelming guilt, Hope Logan Spencer (Annika Noelle) is asking questions. So far, Liam has been able to put her off on the phone. Once, Bill actually grabbed the phone and told Hope that they were in the middle of an important business decision. However, next week Hope will confront Liam and demand an explanation for his odd behavior.

The Bold And The Beautiful Spoilers – No Option But To Confess

The Bold and the Beautiful spoilers reveal that during the week of April 19, Liam will be determined to take action. It is stated that Bill tries to stop Liam from making a decision he will regret. Are we talking about the hit-and-run, the “Lope” relationship, or something else? Let’s say for argument’s sake that it’s about Vinny’s death. It’s clear that Liam knows the only option for him is to confess. If he doesn’t, the guilt is going to eat him alive.

Liam isn’t the only one unraveling. Bill is also coming apart due to their big secret. Instead of panicking and nearly blurting out the truth, Bill just gets angry. We will see Deputy Chief Bradley Baker (Dan Martin) interrupt a moment between Bill and Katie Logan (Heather Tom). Bill reacts with total rage, which Bradley won’t appreciate. It might also make Katie wonder what’s gotten into Bill. It just might ruin their near-reconciliation, which would leave Bill frustrated, enraged, and devastated. Katie is his whole world and he has spent so much time trying to get her back. However, if Katie walks away after his explosion, Bill can only blame himself… not Liam, and not the police.

It sounds like it would be best for everyone, including Liam and Bill if they just come out and admit what they did. To find out if this happens, we will have to keep watching the CBS soap.