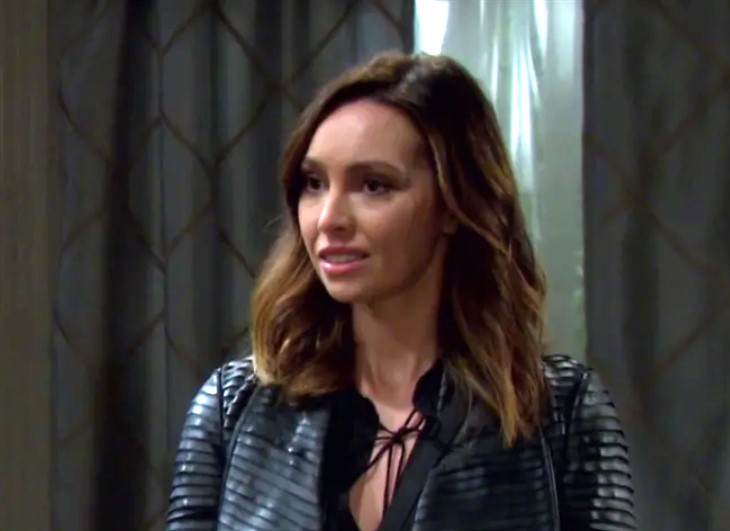 Days of Our Lives (DOOL) spoilers tease that Gwen Rizchech (Emily O’Brien) and Xander Kiriakis (Paul Telfer) will cross paths; will they become partners in crime in an upcoming episode of Days of Our Lives!

Days of Our Lives viewers will recall that recently, Xander has been tempted to return to a life of crime since he is hard up for finances, and Gwen was blackmailed into becoming a drug mule by Dr. Clay Snyder, (Michael Lowry), the dirty doctor at Salem University Hospital! Before that, as Days of Our Lives viewers will recall, Gwen has been no angel during her time in Salem, pulling off all kinds of schemes! Gwen didn’t want to transport drugs for Snyder but he gave her no choice.

Whether she will be a drug mule in the truest sense of the word, with bags of drugs implanted in her or swallowed, or just a delivery girl is unclear although she was in an examining room in a gown when he blackmailed her – Snyder was going to tell Jack Deveraux (Matthew Ashford) that Gwen had miscarried prior to her fall down the stairs at the DiMera mansion – she came clean to Jack about Abigail DiMera (Marci Miller) not having pushed her, but she didn’t come clean about the part that she had already miscarried!

It had been Snyder who had examined her when she came to the hospital. Gwen is obviously in over her head! Xander, on the other hand, had already been given a hit job by his old boss Kristen DiMera (Stacy Haiduk) but didn’t follow through with it when Sami DiMera (Alison Sweeney) offered to pay him double to spare her and Lucas Horton’s (Bryan Datillo) life. However, he had been a mercenary and dealt in stolen goods and kidnappings and extortions, mainly.

Days of Our Lives viewers know that Xander and Gwen have a person in common, and that might be how they meet. Jack Deveraux (Matthew Ashford) knew Xander well enough that he was going to be his best man at his wedding that didn’t happen. Xander had been the one who had rescued Jack from Dr. Wilhelm Rolf’s (William Utay) warehouse and lab facility that had blown up in Nashville Tennessee, and brought him back to Salem, albeit with a bad case of amnesia! Jack is Gwen’s birth father, which has comparatively recently been revealed when the late Laura Horton (Jaime Lyn Bauer) admitted she’d paid Tiffany Rizchech, (also played by Emily O’Brien) a cocktail waitress Jack had a fling with years ago child support for Gwen until Tiffany died of a drug overdose. Gwen will be in between a rock and a hard place as far as trying to get her dad to help her out of the mess with Snyder.

She knows that Jack demands honesty and a lie on top of a lie isn’t going to fly with him, especially now that he’s moved into the Horton House with him. Gwen may not be able to go to Jack for help, but she might talk to a sympathetic Xander about it. Xander may see an opportunity to make some money and work for Snyder but on the other hand he still really doesn’t want to become a mercenary like he was previously, because it can be a very difficult and insecure life. The crime that Xander and Gwen may become partners in is one of outconning a con – they may team up to take the dirty doctor down and in the process get Gwen out of her mess! Snyder is no match for Xander!

The Bold And The Beautiful (B&B) Spoilers: Liam Arrested, Bill Tricked Into Confessing